Since 2009 Ampatuan Massacre nobody convicted and four witnesses slain 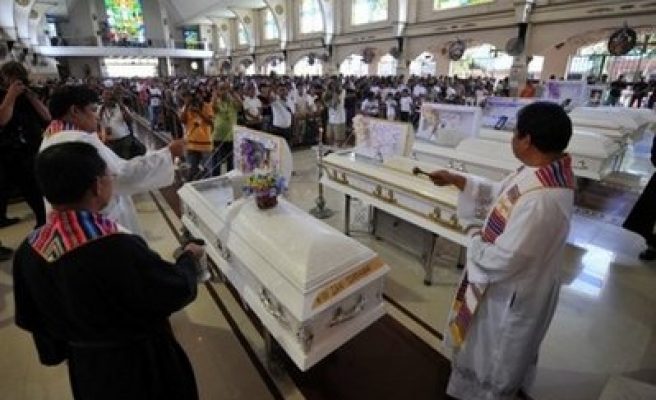 Journalists and officials commemorated the massacre of 58 people in the Philippines’ southern Maguindanao province Sunday as Amnesty International called for those responsible to be brought to justice.

Among those killed on Nov. 23 2009 were 32 media workers in the largest single attack on journalists in the world. The victims had been travelling in an election convoy when they were attacked by more than 100 gunmen, allegedly including police and soldiers.

Members of the Ampatuan clan, who had ruled the province for decades, are the chief suspects and allegedly carried out the massacre to wipe-out their electoral rivals. They deny the charges.

Since the killings, arrest warrants have been issued for 197 suspects but nearly half remain at large, Amnesty said in a statement Sunday.

No-one has been successfully prosecuted in connection with the massacre close to the town of Ampatuan as hearings have dragged on since September 2010. At least four witnesses and four of their family members have been murdered with no-one prosecuted for these killings either.

The latest witness killing came on Tuesday, when Dennis Sakal was gunned down by unidentified men. Another witness, Butch Saudagal, was wounded in the same incident.

Hazel Galang-Folli, Amnesty’s Philippines researcher, said: “Each killing of a witness creates a fresh injustice while reducing the chances of justice being served for the families of the victims of this horrific massacre."

“This is particularly true in a country like the Philippines where court cases have traditionally relied heavily on witness testimony. The Philippine authorities must get their act together and ensure that accountability for this horrific massacre is given high priority and enough resources.”

President Benigno Aquino III, whose term ends in 2016, has vowed to bring the perpetrators to justice and refered to the case as a “litmus test” for the Philippine justice system.

“Until and unless justice has truly been done in this case, none of us can truly claim that the Filipino people have managed to reclaim their humanity,” Justice Secretary Lilia de Lima was quoted as saying by the Mindanews news website on Saturday.

The families of the murdered journalists have written a letter to Pope Francis I, who visits the Philippines in January, asking for his help in the case.

Maguindanao Governor Esmael ‘Toto’ Mangudadatu – the Ampatuans’ political rival at the time of the massacre, whose wife, two sisters and several other relatives were among those killed – has said the prosecutions can be completed in the remaining 19 months of Aquino’s presidency.

On Sunday Mangudadatu led media, police and military representatives to commemorate the fifth anniversary of the atrocity. Christian and Muslim prayers were held at the remote site where the victims' bodies had been buried in a mass grave.

While the Ampatuan clan has largely been removed from power, the province remains volatile. However, Major General Dato Abd Samad bin Hadji Yaakub, the Malaysian head of the International Monitoring Team overseeing the peace process with the Moro Islamic Liberation Front, said there have been improvements in the security situation.

The Ampatuan clan had been bitterly opposed to the Front, once the largest rebel group fighting for Mulsim autonomy on the island of Mindanao.

Mangudadatu and the Aquino government support the peace process and the governor has endorsed the draft Basic Bangsamoro Law, which will introduce a Front-led autonomous government to the region next year.