Four-nation talks aimed at ending Afghanistan's 15-year war has been concluded with a call for direct talks between the government and the Taliban by the end of February. 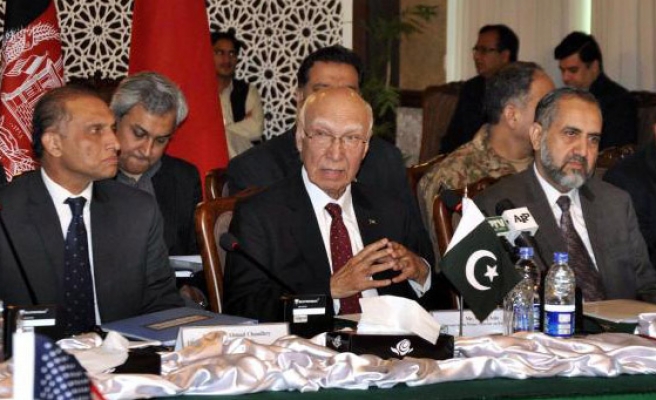 Direct peace talks between Kabul and the Taliban are "expected to take place" by the end of the month, representatives from four countries involved in pre-cursor roadmap negotiations said in a joint statement issued Saturday in Islamabad.

The statement by delegates from Afghanistan, Pakistan, China and the United States came after a third round of talks between the four powers and is the strongest indication yet the Taliban are willing to return to negotiations six months after an earlier round of direct dialogue fell away.

It comes as the insurgents wage an unprecedented winter campaign of violence across Afghanistan, more than 14 years after they were driven out of power by US-led NATO forces.

"The Group stressed that the outcome of the reconciliation process should be a political settlement that results in the cessation of violence, and durable peace in Afghanistan," the statement said.

"Towards this end, the QCG (Quadrilateral Coordination Group) countries agreed to continue joint efforts for setting a date for direct peace talks between the representatives of the Afghan government and Taliban groups expected to take place by the end of February 2016."

The statement added the group would hold its next meeting in Kabul on February 23.

The role of Pakistan, which backed the group during their 1996 - 2001 rule and is accused of continuing to provide shelter to its leaders in exile, is seen as key in persuading the Taliban to return to talks.

The first round of the roadmap talks was held in Islamabad last month, where delegates began laying the groundwork for direct dialogue between Kabul and the group.

A second round was held in Kabul on January 18 which urged the Taliban groups to enter into early talks with the Afghan government without preconditions.

Taliban representatives have been notably absent during the process and analysts caution that any substantive talks are still a long way off.

The Taliban has stepped up attacks on government and foreign targets in Afghanistan this winter, when fighting usually abates, underscoring a worsening security situation.

Pakistan hosted a milestone first round of talks directly with the Taliban in July last year.

But the negotiations stalled when the insurgents belatedly confirmed the death of longtime leader Mullah Omar, sparking infighting within the group.

The statement added the four countries "called on all Taliban groups to join the peace talks". The dominant faction of the Taliban is led by Mullah Akhtar Mansour, who officially succeeding founder Mullah Omar.

A major breakaway faction meanwhile is led by Muhammad Rasul, whose faction is seen by some analysts as closer to Iran.