A marathon siege in Kabul's diplomatic enclave ended for nearly 20 hours, with insurgents showering rockets on Western embassies in a dramatic show of insurgent strength. 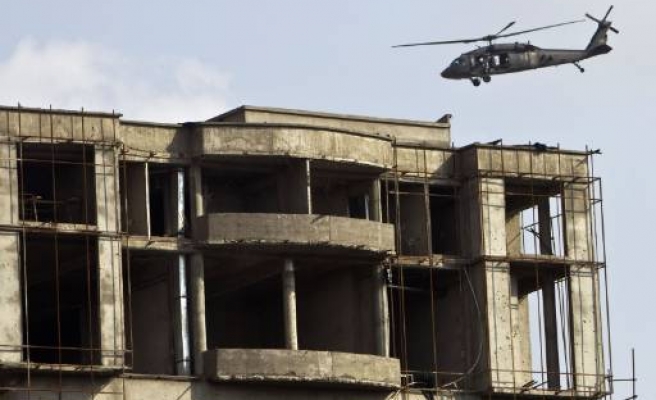 A marathon siege in Kabul's diplomatic enclave ended on Tuesday with the death of the last two of a group of insurgents who had held off Western and Afghan security forces for nearly 20 hours, showering rockets on Western embassies in a dramatic show of insurgent strength.

U.S. Ambassador Ryan Crocker said around six or seven rockets had hit inside the embassy perimeter during the early hours of the attack, launched early on Tuesday afternoon.

"They were firing from at least 800 meters away and with an RPG (rocket-propelled grenade) that's harassment. That's not an attack," he said in an interview transcript handed out to journalists in Kabul.

The insurgents had holed up in a multi-storey building still under construction and launched their attack early on Tuesday afternoon, firing rockets towards the U.S. and other embassies and the headquarters of NATO-led foreign forces.

Three suicide bombers also targeted police buildings in other parts of the city, but the embassy district assault was the most spectacular.

At least 11 civilians were killed, three of them children, NATO-led foreign forces said. The Ministry of the Interior said four policemen died, and that toll was likely to rise.

Afghan security forces backed by NATO and Afghan attack helicopters fought floor-by-floor in the 13-storey building, which the six insurgents appeared to have booby trapped.

They had arrived in a car packed with explosives, and entered the high-rise after shooting a security guard.

The insurgents then hid from helicopters and government and foreign troops in lift shafts and a maze of small rooms.

The group were armed with rocket-propelled grenade launchers, AK-47 assault rifles and suicide bomb vests, a Taliban spokesman said, but the time they held out prompted speculation they had hidden weapons in the building.

Explosions were interspersed with gunfire all afternoon on Tuesday and continued past dawn on Wednesday. Residents of nearby apartments stayed indoors and tried to comfort panicked children, as helicopters flew low overhead.

"It would go silent for 30 to 35 minutes and then there were explosions and the sound of heavy machine guns," one Reuters witness said of a sleepless night. There may be unexploded artillery in parts of the city, NATO warned.

Embassies and restaurants frequented by foreigners were on lock-down all evening. The U.S. and British embassies and the NATO-led coalition said all their employees were safe.

Ambassador Crocker said he believed the Haqqani network was behind the attack, and also blamed them for a truck bomb that injured 77 U.S. troops on Sept. 10.

Named after its leader, Jalaluddin Haqqani, it is one of three, and perhaps the most strongest of the Taliban-allied insurgent factions fighting U.S.-led NATO in Afghanistan.

They are thought to have introduced suicide bombing to Afghanistan, and are believed to have been behind many high-profile attacks in Kabul, including an assassination attempt on President Karzai and assaults on two top hotels.

Ministry of the Interior spokesman Sediq Sediqqi said that although it was too early to say the attack was the work of the Haqqani network, "it is similar to attacks carried by Haqqani".

A U.S. Senate panel has approved a $1.6 billion cut in projected U.S. funding for Afghan security forces, part of a significant reduction in outlays for training and equipping Afghan army and police expected in the coming years.