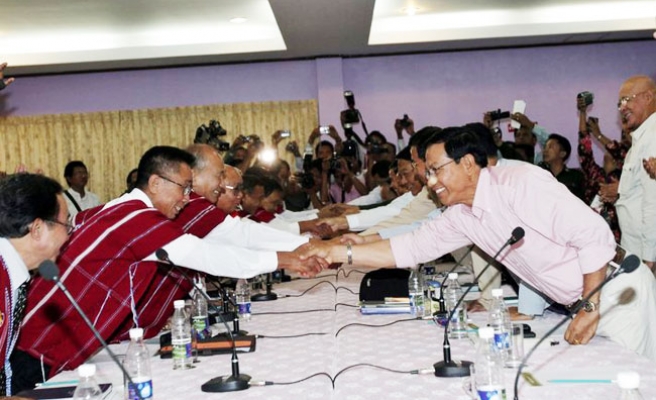 General Gun Maw, deputy commander in chief of the Kachin Independence Army and a member of the insurgents' main political committee, said he made the request to U.S. officials during a visit to the United States that began last week.

Gun Maw, thought to be the most senior KIA official ever to visit Washington, said the invitation was first extended to the United States, Britain, China and the United Nations in February last year.

"This trip, I reaffirmed that invitation," Gun Maw told Reuters in an interview on Monday.

"We would like to have the U.S. present at the peace process as a witness, so this agreement will become strong," he said. "At present, we are still asking the U.S. to be involved. Whether they will be, we don't know yet."

The Kachin are due to hold another round of talks with the Myanmar government in May aimed at ending nearly three years of fighting. A 17-year ceasefire broke down in June 2011.

"The challenge is that from the government side they would purely like to sign a ceasefire, but from the KIO side, in the ceasefire agreement there has to be a future plan involved and what will follow after," Gun Maw said. The KIO is the insurgents' political wing.

"For example, after the ceasefire, there will be a discussion on the building of a federal union and on the rights of the ethnic groups. We would like to have guarantees."

The U.S. State Department did not immediately respond to a request for comment.

After meeting Gun Maw last week, U.S. Assistant Secretary of State of Democracy, Human Rights and Labor Tom Malinowski said he had expressed "firm U.S. support for the post-ceasefire peace process, which will have to tackle long unresolved political grievances."

"The balance between central and local authority, inclusion for all in national and local political processes, constitutional reform, equitable sharing of natural resources, and humanitarian access to internally displaced people are just a few of the issues that must be negotiated in good faith for a ceasefire to lead to durable peace," he said.

Gun Maw said that since fighting resumed in 2011, the KIA had suffered more than 1,000 casualties, including 280 killed.

Gun Maw said that if the United States - which has adopted a policy of engagement with Myanmar and relaxed years of sanctions despite continued concerns about human rights - became involved in the peace process, "they will see the truth and by having seen that, they can also advise and provide some suggestions to the process."

He said it was "only natural" that ethnic groups had been affected by Western governments' re-engagement policies, which have come under scrutiny because of religious violence involving majority Buddhists and minority Muslims in the country's Rakhine state.

"If the international governments engage with a government which doesn't bring justice, then you may not find the right solution and it will affect the KIO," Gun Maw said.

While it was "hard to be optimistic," the KIO was committed to the peace process. Gun Maw said he hoped opposition leader and Nobel peace laureate Aung San Suu Kyi and others would become involved in the political dialogue.

He noted that the stated aim of increased U.S. military engagement was aimed at changing the mindset and behavior of the Myanmar army and to make it a more professional force.

"That is what we have been told, so we are observing whether that is the case," he said.