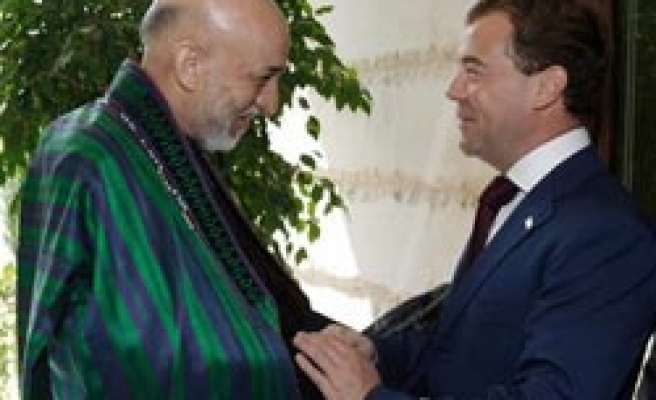 Afghan President Hamid Karzai sought President Dmitry Medvedev's "help" for his nation on Wednesday, two decades after Moscow ended a disastrous conflict there that cost the lives of about 15,000 Soviet troops.

Russia, which analysts say is seeking to increase its influence in Afghanistan and the surrounding region two decades after Soviet troops withdrew, hosted Karzai and Pakistan's President Asif Ali Zardari for talks on security and drugs.

"Let me once again thank you for your concern for Afghanistan," Karzai told Medvedev as they sat down for talks at the Russian president's summer residence near the Black Sea.

"Afghanistan will need the support of friends and from great countries like Russia," Karzai said.

Medvedev was to hold separate talks with Zardari and Tajikistan's President Imomali Rakhmon as well as four-way talks with the visiting leaders.

Russia traditionally has had far warmer ties with India than with Pakistan, but the Kremlin has been broadening its contacts across Asia and the Middle East as it seeks more clout. A similar four-way meeting was held last year in Tajikistan.

Karzai conveyed the "sorrow" of the Afghan people over Russia's deadly summer wildfires and said he hoped Medvedev would visit Afghanistan soon.

Criticisms over US strategy

Russia has said it will not send soldiers to Afghanistan, where the Soviet Union fought a nearly decade-long war, but it has held out the prospect of supplying transport helicopters to aid invasion.

Russia has called for a greater role in Afghanistan for two two regional groups in which it holds sway -- the Collective Security Treaty Organization of ex-Soviet states (CSTO) and the Shanghai Cooperation Organization (SCO), which includes China.