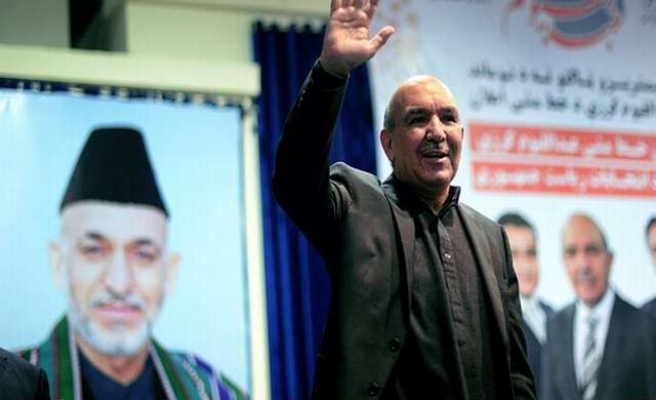 Afghan president's older brother, Qayum Karzai, announced on Wednesday he was withdrawing from next month's presidential election and would back former foreign minister Zalmai Rassoul.

The alliance is the first public acknowledgement of weeks of negotiations aimed at consolidating the voting bloc of Pashtuns, the country's largest ethnic group, and brings together two candidates considered close to the current president.

The pullout was widely anticipated after Karzai failed to show up for a televised debate this week.

"I will go to every mosque, every room and every guesthouse to get this team elected," Karzai told Reuters on the sidelines of a conference after announcing his withdrawal.

"We are hoping to win on the first round. This team represents the only hope for stability in this country."

Rassoul said negotiations on the election alliance had been taking place for two to three weeks.

"This is good for Afghanistan and good for democracy," he said.

The polls are due to take place April 5. If they proceed normally, they will mark the first time in Afghanistan's history that power has been handed from one democratically elected government to another.

But campaigning has kicked off against a backdrop of economic uncertainty and deteriorating security. Taliban have denounced the vote.

Adding to the pressure, U.S.-led forces are reducing their presence this year and threatening to leave completely unless the new Afghan government signs an agreement that would allow some troops to stay and support Afghan forces.

With just under a month to go before the vote, speculation has heightened about alliances between the hopefuls remaining in the race. All the candidates belong to the majority Pashtun ethnic group except for one, who is half-Pashtun.

The Karzai-Rassoul alliance will help consolidate that voting bloc and the supporters of the current government.

"We expect other candidates to join us before the election," said Mahmood Karzai, another of the president's brothers. "I'm thinking of at least three candidates."

He declined to name them, but the printed version of his brother's announcement pulling out of the race gave a clue. It said Qayum Karzai would join "the teams of Doctor Zalmai Rassoul and Abdul Rahim Wardak".

Presidential candidate Wardak is a former defence minister and considered a close ally of the outgoing president.

Mahmood Karzai said his brother Qayum and Rassoul would campaign separately in order to cover the widest possible area.

The main opposition candidate, Abdullah Abdullah, said he was unconcerned about rivals joining forces. He narrowly lost the 2009 election to incumbent Hamid Karzai.

Hamid Karzai is barred by the constitution from seeking a third term. He has not publicly offered his backing to any of the candidates.