Pro-independence leaders in Kashmir have dismissed an Indian offer of fresh talks as "insincere" after police killed nearly 50 protesters and bystanders dead. 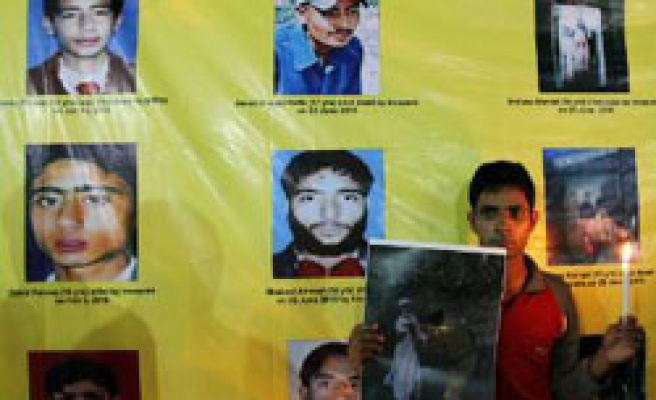 Pro-independence leaders in Kashmir have dismissed an Indian offer of fresh talks as "insincere" after weeks of protests against rule from New Delhi which police killed nearly 50 protesters and bystanders dead.

The Muslim-majority region has been rocked by protests since the death in early June of a teenage student who was killed by a police tear-gas shell.

Some 49 people have been killed, many of them young men and teenagers shot dead by security forces, including 32 in the past eight days.

Indian home minister P. Chidambaram Friday said New Delhi was ready to hold talks with Muslim leaders opposed to Indian-rule in Kashmir, in an apparent attempt to ease the unrest.

But the region's the Chairman of All parties Hurriyet Conference (APHC) Mirwaiz Umar Farooq rejected the offer.

Kashmiri Media Service reported, Farooq has said that India has "never been sincere" to resolve the Kashmir dispute through dialogue process.

Mirwaiz Umar Farooq in a statement issued in Srinagar said that New Delhi had junked the proposals of APHC and was not serious to move forward.

He said that "the APHC had proposed that withdrawal of Indian troops from the occupied territory, repeal of black laws including AFSPA and PSA and release of all political prisoners would be confidence-building measures to start a dialogue process".

He pointed out that dialogue was a way forward towards the final settlement of the Kashmir dispute in accordance with the Kashmiris’ aspirations.

“The killing spree continues and all forms of repression have been put in place by India. Where is the scope for engagement when a reign of terror has been let loose by the occupation troops against the people for demanding their basic right?", he added.

The APHC Chairman urged the Organization of Islamic Conference (OIC) to immediately call a session of its Kashmir Contact Group (KGC) to deliberate on prevailing situation in Kashmir. He said that he had shot a letter to the OIC General Secretary asking him to immediately call a special session of KCG and deliberate on prevailing situation in the territory.

The Mirwaiz, who continued to remain under house arrest, deplored that India had not only snatched the democratic and political rights but also religious rights of the people of Kashmir.

“OIC is morally bound to come to the aid of Kashmiris who are under a military siege without medicines and other essential commodities,” he said, adding that the Organisation must pressurise India to resolve the long-pending Kashmir dispute according to aspirations of Kashmiris.

A Muslim civil liberties group in the US has called for an impartial international probe into the recent civilian killings by Indian police and troops in the territory.

The Washington-based, Muslim Public Affairs Council (MPAC) in a statement posted on its website said that the US must play an active role in ending the ravaging conflict in the region to prevent further loss of lives.

Another Kashmiri leader called for two-day strike to protest against the killing of protesters by Indian police and troops.

Call for the shutdown has been given by veteran Kashmiri Hurriyet leader, Syed Ali Gilani as part of the Quit Kashmir Movement.

He urged people to conduct a march towards Pampore town on Wednesday to mark the 2nd death anniversary of APHC leader, Sheikh Abdul Aziz.