Kashmiris observed the Indian Independence Day as Black Day to convey to the world that the people of Kashmir have yet to exercise their birth right to self-determination. 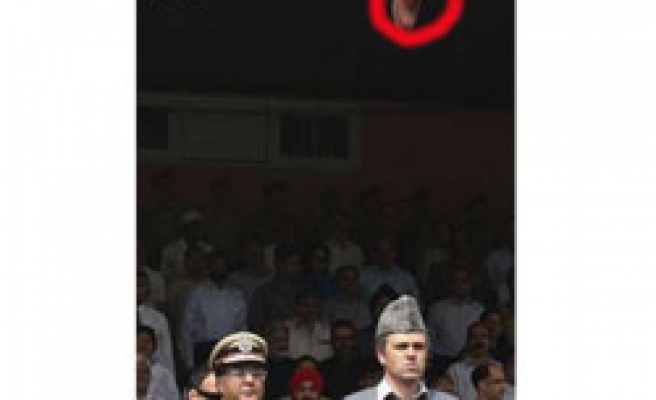 India has imposed curfew, new arangements in the Himalayan Valley as the Kashmiris observed the Indian Independence Day as Black Day to convey to the world that the people of Kashmir have yet to exercise their birth right to self-determination.

Thousands of people held an anti-India protest, dodging heavily armed police who used metal barricades and barbed wire to seal off residential areas and enforce a curfew, which has been imposed off-and-on across the region for almost two months.

Indian police and paramilitary troops had sealed all the roads leading to the Bakhshi Stadium in Srinagar, the main venue for the official function, while sharp shooters had been deployed on the top of various buildings in different areas in the city, according to Kashmir Media Service.

An Indian policeman hurled a shoe at Omar Abdullah, the region's pro-India chief minister, while he took part in an official Independence Day parade. The shoe missed him and the thrower was bundled off by police.

After hurling the shoe, the police officer raised a black flag shouting the slogan, “We want freedom". Indian troops immediately took him into custody.

On the other hand, Indian troops, killed two more youth in different areas. Two persons including a teenager were killed when Indian police fired upon protestors in Narbal and Islamabad. Protests continued in Banihal area of Ramban district.

Kashmir is divided between India and Pakistan but claimed by both. Anti-India sentiment runs deep in the portion of Kashmir it controls, with most people favoring independence from India.

This is not true, all the people in kashmir want freedom of speech,expression,education, job opportunity and better life, not a merger with pakistan.

KASHMIR IS UNDER OCCUPIED ...THE WORLD KNOWS IT..ACCORDING TO UN RESOLUTATION...KASHMIR SHOULD BE FREE...BUT WHERE IS UN SITTING IN ISRAEL LOBBY,,,BAN KI MOON THE ANOTHER PUPPET LIKE OBAMA...INDIAN FORCED KILLED SO FAR 130000 YOUNG BOYS..MORE THAN 30 THOUSAND WIDOWS....15000 DISAPPRED IN JAILS..WHETHER THEY SLAUGHTER THEM ALL..SO MANY UNKNOWN GRAVES FOUND SO FAR...10000 RAPES MOSTLY OLDER AGED....WAKE UP WORLD....WAKE UP UN....