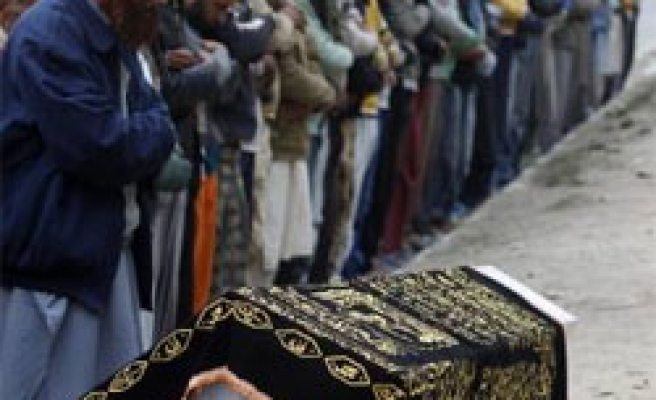 A senior pro-independence leader on Sunday withdrew plans to protest outside army camps in Indian-held Kashmir, fearing a further Indian violence in the Muslim region.

A total of 105 protesters and bystanders -- including children -- have been killed, mostly by security forces firing on demonstrators after being pelted with stones. One policeman has also died.

"Anyone violating the curfew will be dealt with sternly," roared announcements made by loud-speaker fitted police vehicles in Srinagar.

Scores of people at Srinagar's main hospital pleaded with security forces to be allowed to go to their homes to bring medicines and water for the patients but their pleas were ignored.

Locals living near the hospitals have been distributing free food among the attendants, while patients continue to get food from the hospital. But there are no life-saving medicines and drinking water.

Syed Ali Shah Geelani's decision to call off the rallies at army camps comes ahead of a visit by a delegation of leaders from different Indian political parties to Kashmir.

"Instead of marching to army camps, the people should protest in all district headquarters and demand complete withdrawal of Indian troops from Kashmir," Geelani said in a statement.

In the statement issued in Srinagar, the veteran leader said "that the change in the protest programme was made due to the apprehensions that Indian agents were trying to sabotage the protests and dub the ongoing agitation as violent movement."

He urged India to accept Jammu and Kashmir as a disputed territory before initiating dialogue process to settle the lingering dispute.

Ruling out his meeting with the Indian delegation headed by Home Minister, P. Chidambaram, he deplored that "on one hand, India talked about dialogue, while on the other, its troops were killing innocent Kashmiris".

He called upon the people to place banners and placards calling for demilitarization of the territory during the visit of Indian delegation.

Kashmiri groups and parties have long demanded the withdrawal of Indian troops and scrapping of "anti-terrorism" laws, including the Armed Forces Special Powers Act that gives sweeping powers to security forces in Kashmir, where about 500,000 troops are stationed.

Kashmir is divided between India and Pakistan but claimed by both. Anti-India sentiment runs deep in the portion of Kashmir it controls, with most people favoring independence from India.

Where is world conscience about my people and why
The UN is saying nothing about Killings in Kashmir?
Kingdom of Jammu Kashmir Belongs to its People!
Absolutely United Independent Republic of Jammu Kashmir