More than 750 people have sustained pellet injuries with a majority of them on the verge of losing eyesight partially or completely. 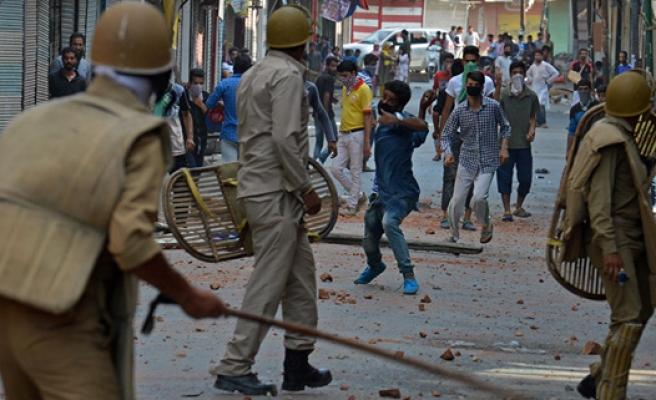 In occupied Kashmir, dozens were injured in Indian forces action while protests were held and clashes took place in various parts of the Valley as the ongoing uprising completed 100 days on Sunday.

As many as 110 people have been killed while over 14,000 have sustained injuries during the uprising which erupted on July 9, a day after Hizbul Mujahideen commander, Burhan Muzaffar Wani, was martyred by the Indian occupation troops in a fake encounter.

Reports from South Kashmir’s Shopian district said at least 20 people were injured when clashes erupted in Nagbal village against the beating of people and vandalizing of property by the Indian forces.

People from adjoining villages like Wedipora also rushed towards the village to protest.

The forces fired pellets and bullets at the protesters. One of the youth received a firearm injury in his leg and was shifted to the District Hospital Islamabad.

The police, however, said that police and forces cordoned off the Urpora Nagbal area and conducted search operations early morning.

At the time of withdrawal, people in large numbers from Hushnpora, Daschnu and Humana assembled and pelted the joint party with stones.

Thirty-eight police CRPF men were injured, and four of their vehicles were damaged.

Late evening reports said that clashes erupted in Tahab area of Pulwama where forces fired dozens of teargas shells in which three youths sustained injuries.  One of them was referred to Srinagar for treatment.

Reports from Sopore said that a protest demonstration was held at the Jamia Masjid.

The protest ended peacefully.  Clashes erupted at Arampora and Chinkipora Sopore after forces intercepted a group of protesting youth. Reports said that protests were staged at Nutnusa and Ganapora villages of north Kashmir’s Kupwara district.  In Srinagar clashes broke out at Batamaloo and Tengpora areas. However, there were no reports of any injuries.