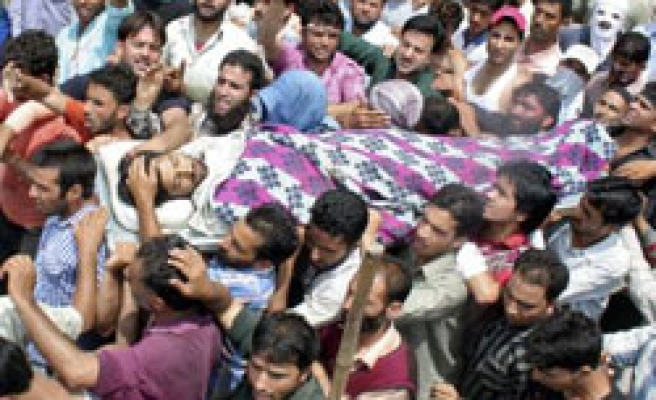 Indian police killed at least four people on Tuesday in fresh clashes, raising the death toll of seven weeks of protests to 43.

At least 25 protesters have been killed in the last five days, civilians shot dead by police.

Police in Srinagar, the main town in the Muslim-majority territory, used loudspeakers mounted on vehicles to warn that "anyone seen violating curfew restrictions will be shot dead."

But state officials denied that an official "shoot-on-sight" order had been issued.

"For the sake of martyrs, I appeal to the youth not to indulge in stone pelting and provocative slogans," said Syed Ali Shah Geelani, an Islamist leader.

"If we succeed in keeping protests peaceful, this would be the first step towards freedom."

But signs are emerging that the violence could become difficult for even Kashmir's separatist leaders to control, triggering uncertainty about a region whose stability affects security across South Asia, from Pakistan to Afghanistan.

"No one seems in control of the protests and I don't think even they (Muslim leaders) can control it," said Noor Ahmad Baba, dean of social sciences at Kashmir University.

Pakistani Foreign Minister Makhdoom Shah Mahmood Qureshi, in a statement, said Islamabad was seriously concerned at the escalation of violence, adding there is a need for the Indian government "to exercise restraint".

The latest round of protests started with the killing of a teenage student in early June.

The region has been locked down for weeks.

Anger has also mounted over a law that gives security forces wide powers to search homes at will and shoot and arrest anybody suspected of being a security threat. Residents say the security forces often abuse this power.

The police's handling of the protests has also generated fury. Often finding themselves under siege from protesters, the police's first response is to fire into the crowds, locals say.

"Kashmir has been talking to New Delhi since 1947, nothing has come out of it so far. India is trying to hoodwink the international community by announcing such peace measures," Shugufta Khan, a 35-year-old school teacher said.

"We are in prison for last two months and Indians are talking of sending more troops. It is now or never. We will fight."