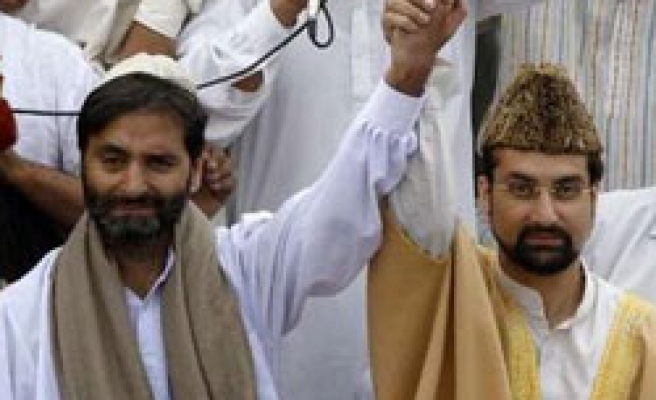 More than 100 civilians have been killed in three months of clashes and curfews that have pitched stone-throwing protesters against the security forces, who have frequently opened fire with live ammunition.

But India put local leaders under house arrest as well.

Police declined to confirm the arrests.

"We choose not to meet the delegation (and) instead sent a memorandum," Mirwaiz Umar Farooq, the region's chief cleric and chairman of the All Parties Hurriyat (Freedom) Conference, told Reuters only hours before he was placed under house arrest.

"We have seen that only when a major crisis erupts, there are visible efforts to engage and understand our aspirations. As soon as immediate crisis subsides, political complacency gets restored."

"We are now wary that your visit today, however well-intentioned, represents only an effort at short-term crisis management," Farooq said in his memorandum.

Pro-India politicians in the Muslim-majority region met with the lawmakers and asked for progress in the region, including autonomy for the region and for the repeal of a widely hated law that gives security forces immunity in cases of civilian deaths.

Mehbooba Mufti, leader of the state government opposition, sent party members to Monday's meetings at a conference centre in the region's main town of Srinagar, but did not attend herself.

As New Delhi's representatives landed in Srinagar, the state's summer capital, authorities enforced a strict curfew across the region.

Kashmir's main opposition Peoples' Democratic Party reiterated its call for freeing political prisoners and for the withdrawal of the law on immunity to security forces. The ruling National Conference asked that autonomy be given to the state.

Many of those killed have been young men or teenagers, and news of each death has brought more people on to the streets and led to further deadly clashes with the security forces.

A 22-year-old woman bystander was killed during protests on Sunday evening in the northern town of Sopore, bringing the number of civilians to have died to 106.

Curfews and strikes have shut down Srinagar and many other towns for weeks at a time, with residents complaining of shortages of food and essential medicine.

Kashmiri groups and parties have long demanded the withdrawal of Indian troops and scrapping of "anti-terrorism" laws, including the Armed Forces Special Powers Act that gives sweeping powers to security forces in Kashmir, where about 500,000 troops are stationed.

In 1948, the United Nations adopted a resolution calling for a referendum for Kashmir to determine whether the Himalayan region should be part of India and Pakistan. But India has stil rejected to hold referendum in Kashmiri territory.