Kerry in Tajikistan for talks on Afghan border threat

Kerry's visit aimed at assuring Dushanbe of Washington's ongoing commitment to helping Tajikistan secure its border, a task Russia has historically helped with 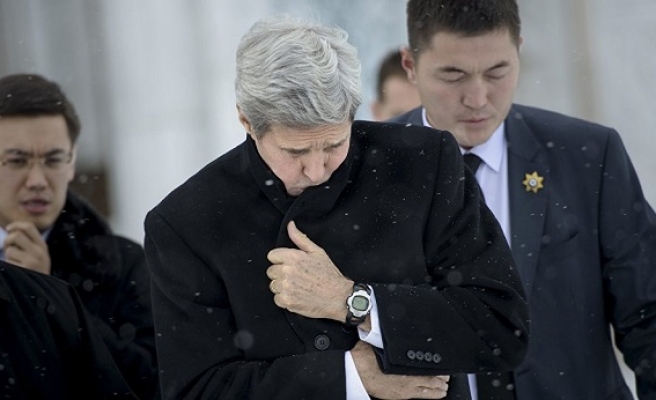 US Secretary of State John Kerry visited Tajikistan Tuesday to talk about security threats on its Afghan border, on the fourth leg of a five-nation tour of Central Asia.

Kerry's plane arrived in Dushanbe from Astana under driving rain and he quickly transferred to the presidential palace for talks with veteran Tajik leader President Emomali Rakhmon.

Tajikistan has already endured a devastating civil war since its independence from the Soviet Union in 1991 and is deeply concerned about violence along the 1,300-kilometre (800-mile) southern border it shares with the conflict-torn country.

As the United States shrinks its troop footprint in Afghanistan, and after the Taliban stormed and briefly held the strategic northern city of Kunduz last month, those fears are mounting.

Autocratic ruler Rakhmon, who came to power in 1992, has also been accused of using an exaggerated threat of extremist militancy to crack down on his domestic opposition.

Kerry came to Dushanbe to assure him of Washington's ongoing commitment to helping Tajikistan secure its border, a task Russia has historically helped with.

US officials also said he would pressure Rakhmon on human and civic rights issues, but there was no mention of this in his opening statement before the closed door talks.

"Let me assure you that the United States remains committed to a Tajikistan that remains sovereign, secure and prosperous," he said, vowing stronger security cooperation.

"I think it's fair to say that we have as much ... security cooperation with Tajikistan as with any other country in the region," Kerry added.

"We're both deeply concerned about security in Afghanistan and on the border, about counter-narcotics and terrorism."

After the talks in Tajikistan, Kerry was due to fly to neighbouring Turkmenistan, another Afghan neighbour.