Kerry will push Southeast Asian and Chinese leaders to discuss sea dispute at an Asian summit. 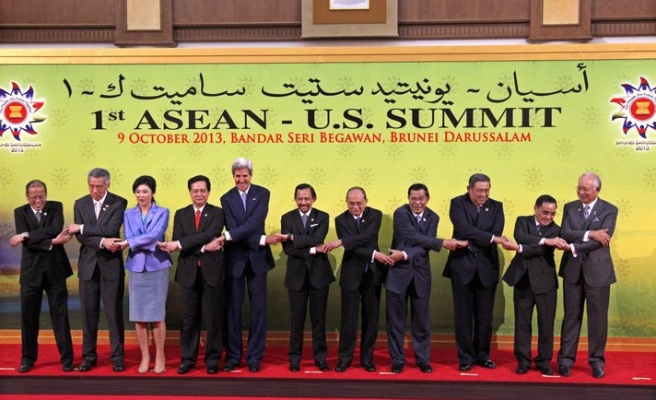 U.S. Secretary of State John Kerry will push Southeast Asian leaders and China to discuss the South China Sea dispute at an Asian summit, a senior U.S. official said on Wednesday, despite Beijing's reluctance to address the issue at such meetings.

Obama last week cancelled his scheduled trip to the summit due to the U.S. government shutdown, raising concerns that Washington would lose some of its influence in counteringChina's assertive claims over the South China Sea.

China has resisted discussing the issue with the 10-member Association of Southeast Asian Nations(ASEAN), preferring to settle disputes in the South China Sea through one-to-one negotiations with individual claimants.

"The Chinese consistently indicate their view that 'difficult issues' that might fall outside the comfort zone of any member need not be discussed," said the U.S. official.

"That is not a view that is held by the U.S., or, I believe, many if not most of the EAS member states, but we will find out."

The conflicting claims over the South China Sea pit an increasingly assertive Beijing against smaller Asian nations that look to support from the United States. The row is one of the region's biggest flashpoints amid China's military build-up and the U.S. strategic "pivot" back to Asia signalled by theObama administration in 2011.

Washington says it is officially neutral but has put pressure on Beijing and other claimants to end the dispute through talks.

Kerry would emphasise "the role of the United States as "a longstanding champion of security and stability in the region, and as an advocate of the rule of law, peaceful solution of disputes, and freedom of navigation, and the principle of unimpeded lawful commerce," the senior official said.

Nevertheless, Washington will be hamstrung at the summit because of Obama's absence.

"I'm sure the Chinese don't mind that I'm not there right now," the U.S. president said at a news conference in Washington on Tuesday. "There are areas where we have differences and they can present their point of view and not get as much push back as if I were there."

In an apparent softening of its previous stance, Beijing agreed this year to hold "consultations" with ASEAN on a code of conduct (CoC) for disputes in the South China Sea.

But some diplomats and analysts say China may be giving the appearance of dialogue without committing to anything substantive, aiming to drag the talks out for years while it continues to consolidate its expansive maritime claims.

"It's a face-saving mechanism to show the world, to show ASEAN, that China is committed to come up with a CoC but the consultations are designed to delay formal negotiations on a binding code," said one diplomat from an ASEAN nation.

However, Premier Li said the CoC talks in the city of Suzhou last month were a success and Chinawould be willing to build on that, although he did not give any specifics.

"We've always agreed that South China Sea disputes should be dealt with in a direct way, and to seek a resolution through negotiations and talks," Li said in a speech at the summit.

He however maintained that China "is unshakable in its resolve to uphold national sovereignty and territorial integrity".

The dispute has soured relations between China and U.S. ally the Philippines, in particular. The two countries have been involved in naval standoffs and China has effectively occupied a shoal just 124 nautical miles (230 km) off the Philippine coast.

Manila is taking part in the CoC talks but has angered China by launching an arbitration case with theUnited Nations on the validity of China's claims.

Philippine President Benigno Aquino stressed the importance of the rule of law to the region's economic well-being in a speech on Wednesday, calling for a return to the naval status quo that existed at the time a 2002 non-binding agreement on maritime conduct was signed by China and ASEAN.

"Our development as a region cannot be realized in an international environment where the rule of law does not exist," Aquino said.