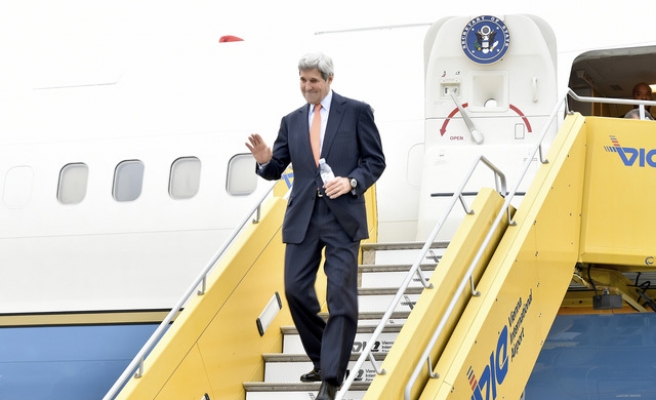 The United States State Department has raised concerns about the political situation in Cambodia, with the subject expected to be one of those raised by Secretary of State John Kerry during meetings in the capital Tuesday.

On Monday morning, the State Department released the transcript of a briefing given to media by telephone in the U.S., in which a senior state department official also told one reporter that Cambodia’s chairmanship of the Association of Southeast Asian Nations (ASEAN) had “left a black mark” on the group and should “not be repeated” by current chair, Laos.

The memo said that while Kerry -- expected to arrive in Phnom Penh on Monday -- will meet with Prime Minister Hun Sen and Foreign Minister Hor Namhong to talk about the economy and trade, “at the same time, we have concerns about political developments.”

It noted an increase in parliamentary seats for the opposition in the 2013 elections, but said there had also been “some setbacks”.

"He’ll also meet with members of civil society to underscore both U.S. support for democracy in Cambodia but also, importantly, U.S. support for human rights, for civil rights, and for political space,” the department briefing said.

When Cambodia chaired ASEAN in 2012, a weakness was seen to be the failure to issue a joint communiqué on the ongoing territorial dispute in the South China Sea between China, Malaysia, the Philippines, Vietnam and Brunei.

The briefing did not say if that specific issue would be raised on Kerry’s visit.

Yim Sovann, spokesman for the opposition Cambodia National Party, confirmed to Anadolu Agency on Monday that party officials would meet with Kerry on Tuesday.

“We are going to discuss about the upcoming election, the political situation,” he said.

“We will also talk about the political environment; we do not want an oppressive one. We want [the next election] to be free, fair; we want to solve problems that remain so far, human rights violations and also opposition rights.”

Political analyst Ou Virak also confirmed to Anadolu Agency that he would be meeting with Kerry on Tuesday, saying that the “best-case scenario,” in terms of an outcome of the talks, would be the release of some prisoners that rights groups say have been unfairly jailed.

Although China has become one of Cambodia’s biggest benefactors in recent years—particularly with regard to Cambodia’s military—the U.S. still holds sway on the international stage, Virak said.

“The biggest invite is to meet [U.S. President Barack] Obama in California in February [where the U.S.-ASEAN summit is to be held].

Cambodia "is not looking to China for the greatest stamp of approval or legitimacy—Hun Sen is still desperate for that from the US. The CPP looks up to the US. If they can, they want to be seen in photo ops with many Western officials,” he added.

Kerry will hold a press conference with the media in Phnom Penh on Tuesday afternoon.

Council of Ministers spokesman Phay Siphan could not be reached for comment.