Sri Lanka has plunged into a constitutional crisis after its president sacked the prime minister and appointed a controversial former strongman ruler in his place. 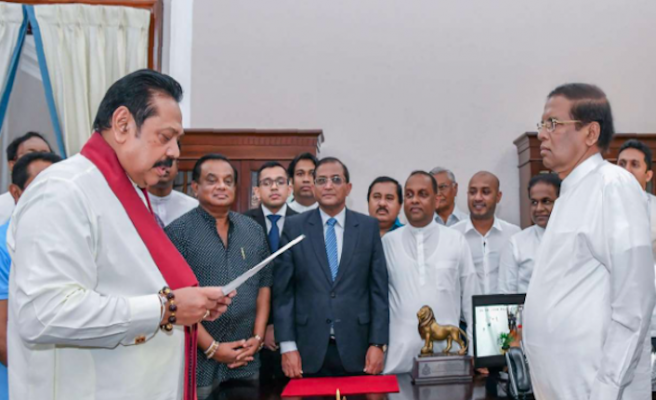 Here is a timeline of events leading up to the standoff that could see former president Mahinda Rajapakse return to power:

Rajapakse loses a presidential election to Maithripala Sirisena on January 8, 2015, after a decade in power during which he ended a brutal war with Tamil separatists amid widespread allegations of war crimes with thousands of civilians killed. His term was also tainted by corruption accusations. The 72-year-old denies any wrongdoing in the conflict or in the handing out of contracts but he and his family have been under investigation and face international criticism.

Rajapakse becomes the first Sri Lankan former president to make a return as a member of parliament following a legislative election in August 2015. But his Sri Lanka Freedom Party (SLFP) is beaten into second place by Ranil Wickremesinghe's United National Party, dashing his hopes of securing new power as prime minister.

A special anti-corruption court launches operations on August 24 with a case against Rajapakse's former chief of staff who is accused of siphoning off $3 million from a construction deal. Another Rajapakse official has already been jailed for three years for graft.

Two of the former president's three sons are also accused of graft. Rajapakse says he is the victim of a "political witch hunt".

Out of the blue but under growing pressure, President Sirisena sacks coalition ally Wikremesinghe as prime minister and installs Rajapakse. With Wickremesinghe resisting his ouster, the move plunges Sri Lanka into deep turmoil likely to end up in bitter court challenges, with a presidential election due in 2019 and legislative polls the following year.