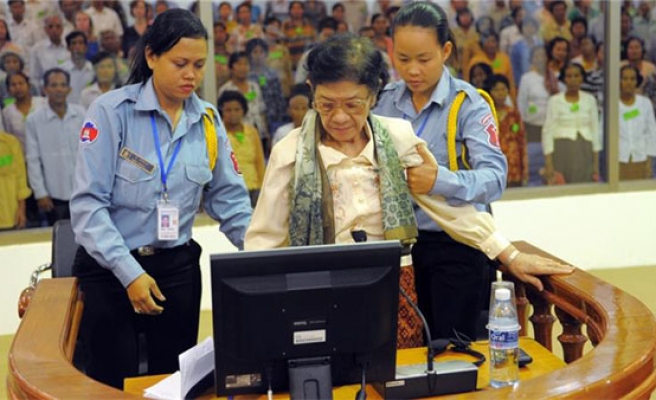 Ieng Thirith, one of the highest-ranking women in the brutal Khmer Rouge regime who was charged with a range of serious crimes but was found unfit to stand trial, has died in the Cambodia province of Pailin at the age of 83.

A spokesman from the Khmer Rouge tribunal and the head of the Documentation Center of Cambodia (DC-Cam) confirmed the death to Anadolu Agency on Saturday afternoon.

Thirith, then known as Khieu Thirith, had studied in the Sorbonne alongside those who would go on to drag Cambodia into a dystopian nightmare, in which cities and urban centers were emptied out and people were put to work labouring in rice fields and building dams.

Among them was Pol Pot, who went on to marry Thirith’s sister and lead the Khmer Rouge, and Ieng Sary, whom Thirith married in 1953. He would go on to be the regime’s foreign minister.

Ieng Thirith’s role during the regime was as minister of social affairs, but under her, the sick and frail succumbed to the conditions in which they laboured, hospitals shut down and medicines became scarce.

“She was the Minister of Social Affairs and she visited sites where people worked… she has seen the sicknesss and that’s why it is important what is left behind… the unknown position. What convinced her? DC-Cam executive director Youk Chhang said in an interview with Anadolu Agency on Saturday.

For him, her impact was significant, not least because she was a woman who had risen so highly up the ranks of the ultra-Maoist regime.

“She wasn’t just in the office, but she was in the field… people were starving and that’s something,” he said.

Thirith was arrested alongside her husband, Sary, in 2007. She was charged with genocide, crimes against humanity and grave breaches of the Geneva Conventions of 1949. However, she never stood in the trial that goes on today.

Proceedings against her were stayed in 2012, after she was found medically unfit to stand trial, owing to worsening dementia. Sary died in March 2013 after being hospitalised with diarrhea and vomiting.

Although freed, Thirith was still under the judicial supervision of the Khmer Rouge tribunal, whose spokesman Neth Pheaktra confirmed her death, as sis an emailed statement.

Pheaktra told Anadolu Agency that prosecutors would now have to investigate the autopsy results, and then present these to the court.

“It’s something we all have to live with, when the accused has such five star treatment, when all of us suffered and continue to suffer with the medical system,” Chhang said.

“There’s a Khmer saying that ‘one has to swallow a stone,’ and that’s what the victims had to endure…. Why did she make such decisions that cost lives?”