Kyrgyzstan's president said she reserved the right to cancel landmark elections next month and declare a state of emergency should violence erupt again. 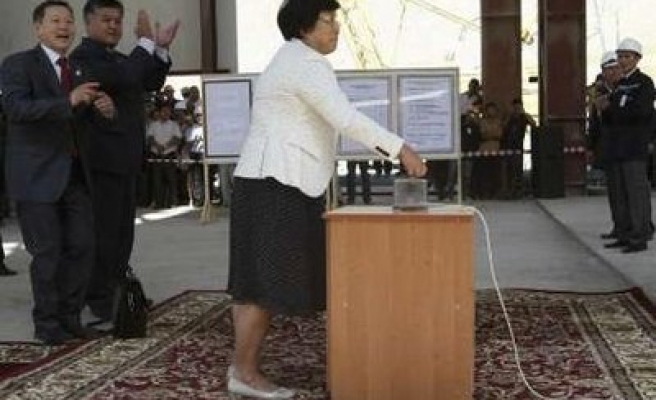 Kyrgyzstan's acting president said on Tuesday she reserved the right to cancel landmark elections next month and declare a state of emergency should violence erupt again in the Central Asian republic.

Roza Otunbayeva told a conference that Kyrgyz security forces would be on high alert in the run-up to elections on Oct. 10 that she hopes will create the first parliamentary democracy in Central Asia.

"These are momentous elections and I ask you not to use violence. We need to make every effort in order not to allow an escalation of tension," said Otunbayeva, a former ambassador to Britain and the United States.

She was addressing an audience comprising members of 25 political parties, election observers and non-governmental organisations in the Kyrgyz capital Bishkek.

"The constitution gives me the right, as president of the country, to take the most severe measures. If there's a question over the country's unity, we can certainly introduce a state of emergency and the elections can be stopped."

The interim government of Kyrgyzstan, a former Soviet republic hosting U.S. and Russian military air bases, has struggled to assert control over southern parts of the country since assuming power following a popular revolt on April 7.

Nearly 400 people were killed, and possibly hundreds more, during several days of violence in southern Kyrgyzstan in June. Clashes between ethnic Kyrgyz and Uzbeks in the region also left thousands of people homeless.

"I ask you not to allow the issue of inter-ethnic relations to become politicised," Otunbayeva said.

Only two weeks after the worst bloodshed in the country's modern history, Kyrgyzstan voted to change the constitution to devolve more power to the prime minister in a region otherwise governed by presidential strongmen. Under the new charter, Otunbayeva will be acting president until Dec. 31, 2011. Parliamentary elections are planned every five years and no single political party will be allowed more than 65 of the 120 parliamentary seats.

"Our law enforcement bodies, our security forces and our army will be on heightened alert to allow this event, which will finally restore a legitimate state authority, to take place," she said.