Kyrgyzstan to choose president amid 20 candidates

Two decades after independence from the Soviet Union, Kyrgyzstan, which borders economic powerhouse China and lies on a drug trafficking route out of Afghanistan, remains culturally and ethnically divided. 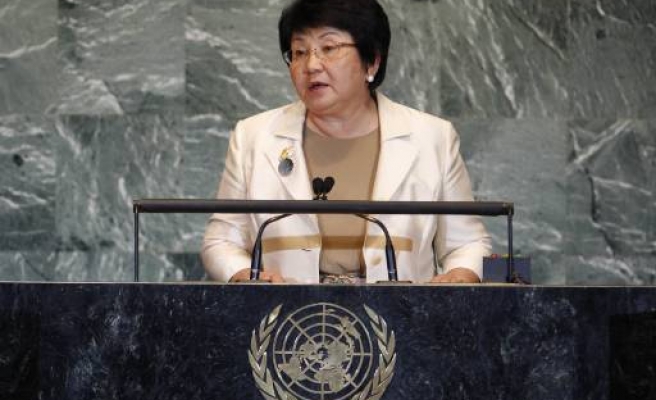 Kyrgyzstan will choose its next president from a list of 20 candidates in an election next month that could expose divisions between the north and south of the volatile Central Asian state.

Official campaigning began on Monday after the Central Election Commission named its final list of candidates for president of the strategic country of 5.5 million people, which hosts both U.S. and Russian military air bases.

The Oct. 30 vote, which some analysts say will need a second round, will pit current Prime Minister Almazbek Atambayev against heavyweight rivals from the south of the country, where central government's grip on power is tenuous.

The election is the culmination of constitutional reforms introduced after the overthrow of President Kurmanbek Bakiyev in April 2010. Current President Roza Otunbayeva, who led the interim government that took power, will step down on Dec. 31.

Two decades after independence from the Soviet Union, Kyrgyzstan, which borders economic powerhouse China and lies on a drug trafficking route out of Afghanistan, remains culturally and ethnically divided.

As well as divisions between the more developed north and poorer south, tensions persist between ethnic Kyrgyz and Uzbeks in the south after the violent clashes that killed more than 400 people in June 2010.

A fragile coalition government, led by Atambayev, is attempting to entrench the first parliamentary democracy in a region otherwise governed by strongman presidents.

But some politicians oppose this model of government. Those with links to the Bakiyev government have a groundswell of support in the ousted president's southern strongholds. Bakiyev himself is now exiled in Belarus.

The final list of candidates eliminated three quarters of the 83 hopefuls who applied to run for president, a group that had included retired army officers, scientists and the unemployed.

Most fell foul of the requirements to present at least 30,000 signatures, pay a deposit and pass a public Kyrgyz language test in a country where Russian is still the first language for many.

Kyrgyz television stations have been temporarily forbidden from transmitting foreign news broadcasts that could be seen to affect the outcome of the election. Most foreign news programmes broadcast in Kyrgyzstan are from Russia.

In the first sign of pre-election manoeuvring, a would-be contender effectively threw his weight behind Atambayev by withdrawing from the race shortly before the final list was published, despite having fulfilled the necessary criteria.

Ata Meken (Fatherland) party leader Omurbek Tekebayev, nicknamed "Father of the Constitution", explained his decision in a statement as a means of "consolidating and strengthening the unity of democratic forces". He did not mention Atambayev.

Should no single candidate win more than 50 percent of the vote, the two leading candidates will stage a run-off election after a minimum period of two weeks has elapsed.

"It's obvious that there will be a second round," said Alexander Kulinsky, spokesman for Tekebayev, before forecasting an Atambayev victory "by a whisker".

Political and military analyst Toktogul Kakchekeyev, however, forecast that Atambayev's experience in the current and previous governments could help him to emerge victorious in the first round.

Future presidents of Kyrgyzstan will be limited to a single six-year term, but will have the right to appoint the defence minister and the national security head.

The Organisation for Security and Cooperation in Europe (OSCE) has sent 28 long-term election observers to Kyrgyzstan and will dispatch a further 350 observers to monitor the vote.