Afghan villagers vented anger with their government as they scrambled for emergency aid, as landslide reaffirms destruction and calamity status of the country becase of unending wars in Afghanistan 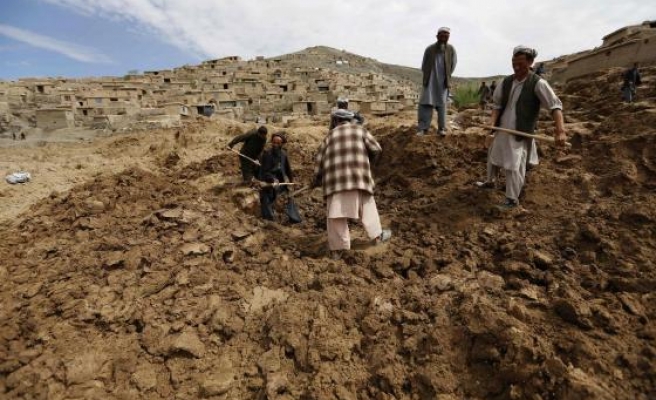 Grief-stricken and desititute Afghan villagers vented anger with their government as they scrambled for emergency aid, three days after deadly landslides engulfed their homes.

The number of dead may never be known though U.N. and Afghan officials have estimated fatalities at anywhere between 500 and 2,700 people.

U.N. agencies and non governmental organizations distributed supplies, but displaced villagers complained others from nearby areas had taken supplies meant for them.

"There is no proper plan to give aid to the needy," Rahmatullah, a villager who lost five family members, told Reuters on Monday.

"People from other villages came here and receive help but the actual needy people are ignored by the officials," Rahmatullah said, his creased face covered with dust as he peered out of the tent he and his parents had been given.

Backed by their armed militia, strongmen from the dominant ethnic Uzbek community in the area took aid delivery into their own hands, sending truckloads of food, water and tents to the stricken village.

In chaotic scenes, villagers scuffled in a bid to get the rations, prompting police to fire warning shots in the air. The aid was then sent to a dispensing center at the provincial capital Faizabad, two hours drive away.

Some 4,000 people been displaced by Friday's landslide, and survivors have been warned against returning home because of the danger of more slides.

"Seven hundred families are at great risk and the government has done nothing so far to move them from high ground," said Abdul Rauf Enhaam, an MP visiting the site.

"We have suggested the government move the families to empty ground near the airport but we haven't heard anything yet. Without international assistance, the government won't do anything and these people will die," he added.

The Afghan government on Sunday called the landslide site a a mass grave, but hundreds were still digging at the site on Monday hoping of finding the bodies of their loves ones.

"Instead of giving us wheat, the government should have brought in equipment to dig out the dead bodies," said Habibullah, 22, who lost his entire family to the landslide.

NEED FOR HELP TO REBUILD COUNTRY

Afghanistan will need help from neighbours to rebuild country after U.S. troop withdrawal.

As the United States readies for a military withdrawal from Afghanistan by the end of this year, prospects for security and peace are likely to depend largely on how Afghanistan's neighbors behave.

Their support will be crucial to the new government's efforts to rebuild the country and its economy.

“The future of Afghan security, post-withdrawal will depend on how well the Afghan Taliban are brought back into the fold," said Michael Keating, a senior fellow at the University of Massachusetts. "It will also depend on the actions of the Pakistani government and its Inter-Services Intelligence, which have been intimately involved in Afghan affairs since the 1980s."

Afghanistan's neighbors have a key role to play, said Shanthie Mariet D'Souza, who researches development and security in Afghanistan at the National University of Singapore.

“India and Pakistan need to play a constructive role in stabilizing Afghanistan," D'Souza said. "India has provided more than US$2 billion for various infrastructure, development and capacity-building projects for rebuilding Afghanistan. There is a need for Pakistan to change course and involve itself in such reconstruction activities to accrue the good will among the Afghans and establish friendly relations with its neighbors."

Without having formal control of any areas, the militant group has been able to make its presence felt throughout the country, especially in central and southern parts of Afghanistan, and will pose a challenge to Afghan security forces in the absense of foreign forces.

“The kind of security failures that the Afghan government has had of late, will probably not change anytime soon, whoever forms the next government," said Marvin G. Weinbaum, professor of political science at the University of Illinois at Urbana-Champaign. "It will be impossible to prevent individuals or a small group from mounting well planned attacks, particularly on soft targets in urban areas. But aside from the psychological effects, these, attacks are not a good measure of the Taliban's strength."

Another concern for observers of Afghanistan's security is whether the number of NATO forces remaining after the withdrawal could effectively counter insurgency. D'Souza said that while Afghan forces will need help to build their own capabilities in challenging militant groups, NATO forces restricted to training can not be effective without a clear counter-insurgency strategy.

More than three decades of turmoil and war in Afghanistan have left the country with weak infrastructure, millions of displaced citizens and thousands who have been killed or disabled – a situation the country will struggle to recover from.

Besides security issues, the newly-elected president will have to deal with a frail economy, weak infrastructure, reconstruction, unemployment, restrictions on female education and corruption. They will also have to work towards the repatriation and rehabilitation of Afghan refugees, millions of whom are living in Pakistan and Iran and who will only return if there is peace and economic stability. Foreign aid could be crucial in that reconstruction – when foreign forces withdraw, Afghanistan will need to ensure that it can meet the expenses of its security services and government workers.