Ten people were missing after a month's worth of rain fell overnight, loosening slopes already saturated by heavy rain over the past few weeks. 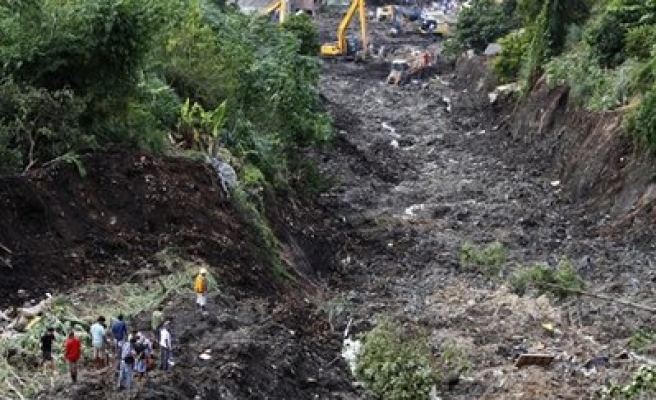 At least 36 people, including several children, were killed in Japan on Wednesday, when landslides triggered by torrential rain slammed into the outskirts of the western city of Hiroshima, and the toll could rise further, police said.

Seven people were missing after a month's worth of rain fell overnight, loosening slopes already saturated by heavy rain over the past few weeks.

"There was rain and thunder all night, beating down so hard I was scared to go outside," a resident told Fuji TV. "Great big drops. I've never seen anything like this."

Helicopters clattered overhead, lifting out survivors, as rescue workers searched through mud and piles of stones in residential areas about 5 km (3 miles) from the city centre.

Among those dug out of the debris were two brothers, aged eleven and two, whose house was struck as they slept.

A child's red school bag, covered in mud, lay in the debris. Houses had been pushed 100 metres (yards) by the landslide in the worst-hit area, where thick, knee-high mud hampered rescue efforts.

"The rain was just pouring down and the street in front of my house turned into a river," a man in his 70s told national television NHK.

Hiroshima city authorities issued an evacuation advisory notice about an hour after the first landslide on Wednesday.

"Something went wrong in our analysis (of the situation) ... We failed to issue an evacuation advisory ahead of the disaster. Looking back, I believe this is something we need to amend," an official at the city's fire department said.

The soil in the area was of a kind that absorbed water until it suddenly loosened and slid, increasing the danger, disaster management experts told NHK.

About 240 mm (9 inches) of rain fell in the area in the 24 hours up to Wednesday morning, a record-breaking level equivalent to a month's worth of rain in a usual August, the Meteorological Agency said. Roughly half of that rain fell in one hour on Wednesday.

The force of the landslide crumbled asphalt roads, while streams of mud tore through neighbourhoods, turning houses into piles of twisted wreckage. Boulders with a diameter of as much as three metres (yards) lay scattered around.

More rain was likely in western Japan later on Wednesday.

Prime Minister Shinzo Abe cut short his summer vacation to head back to Tokyo. He said he would dispatch several hundred military personnel to help with rescue efforts. By Wednesday evening, about 500 such troops had been sent in.

Landslides killed 31 people in Hiroshima in 1999, including six in the same area hit this time.