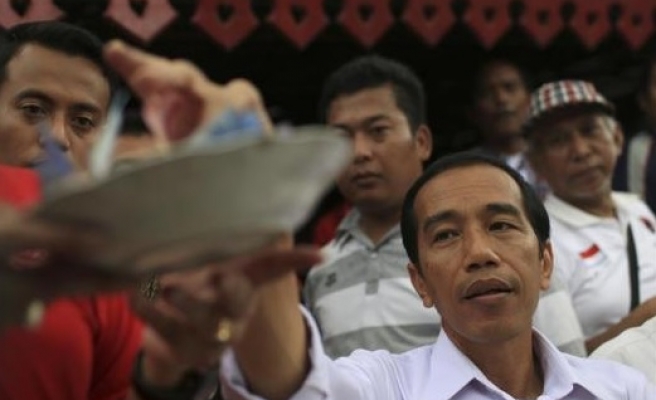 The man most likely elected Indonesia's new president warned on Thursday against tampering with ballots ahead of a final count of votes later this month.

Joko "Jokowi" Widodo, named the winner of Wednesday's disputed election by several non-partisan pollsters who have been accurate in the past, also displayed fledgling presidential credentials at a news conference, condemning Israel's Gaza offensive.

Both Jokowi and rival candidate, former general Prabowo Subianto, claimed victory in the election, the closest ever such contest in the world's third biggest democracy.

The Elections Commission is to announce the official result around July 22.

"We ask everyone's cooperation to now safeguard the election result from yesterday until the official result by (the Elections Commission)...I would to ask everyone not to taint the sincerity of Indonesian society's aspirations in the election," he told reporters, a clear reference to fears of tampering with the votes cast.

Prabowo has accused his opponent of jumping the gun by claiming victory before the final count.

He cited different, unnamed quick counts as putting him ahead.

The quick counts are conducted by private agencies approved by the Elections Commission which collate actual vote tallies as they come out of each district. The results however are unofficial.

On Wednesday night, President Susilo Bambang Yudhoyono urged both candidates to keep their supporters in check during the agonising wait for the official result.

About 250,000 police were on alert across the sprawling archipelago, the world's fourth-most populous nation, but there were no reports of violence. Home to the world's largest Muslim population, much of the country is engaged in the Ramadan fasting month when followers of the religion are exhorted to focus on spiritual matters.

"In my opinion the country is now divided into two camps .... We leave it to the Election Commission now to announce the results. I don't expect to see violence because we've been told to keep calm," said Johan, 45, in the West Java capital Bandung.

West Java, the country's most populous province, was seen as a key battleground for the election and where conservative Islamic parties backing Prabowo hold considerable sway. But some quick counts showed that Prabowo only won the province by a narrow margin.

Indonesia, Southeast Asia's biggest economy and a member of the G-20 group of nations, was swept by violence in which hundreds of people were killed when strongman ruler Suharto was ousted in 1998 after over three decades in power. It has since made a slow transition to full democracy, with this only its third direct presidential election.

Indonesian financial markets surged in the belief that the unassuming Jokowi, who is seen as a representative of the common man and the face of reform, had won.

His opponent Prabowo is seen as a last gasp of the old guard and his nationalist rhetoric and suggestions of a greater state role in the economy has worried many investors.

Jakarta stocks rose to a one-year high on expectations and the rupiah also strengthened against the dollar.

"We expect investors (particularly foreign) to start pricing in a Jokowi win immediately and both bond and equity markets along with the rupiah should do well," said Jakarta-based brokerage Trimegah Securities in a research note.

The rupiah also rose, climbing to a seven-week high against the dollar at 11,520 despite the uncertainty.

"It seems like the market will rise in the next couple of days, but it may not sustain the gain until there is an official result from the KPU," said Jeffrosenberg Tan, a director at Sinar Mas Asset Management, referring to Indonesia's Elections Commission.

The presidential race has been the dirtiest and most confrontational in a country which traditionally holds up the value of consensus politics.

Jokowi took an early step onto the international political stage by condemning Israel's offensive in Gaza. Indonesia has long supported the Palestinian cause and does not have diplomatic relations with Israel.

"Israel's attack on the Gaza Strip...is a violation of human rights," he said.