Lot of work in New Delhi for Games: Federation

Commonwealth Games Federation chief said there was still work to be done amid concerns about security. 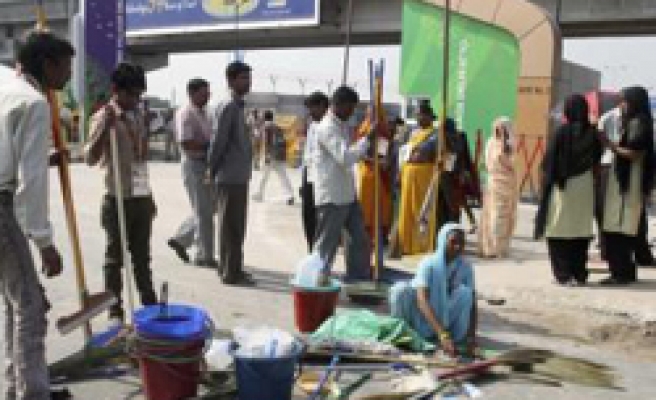 The Commonwealth Games Federation chief said on Saturday there was still work to be done amid concerns about security before India's showcase event starts next week, but that it would go ahead with all countries taking part.

Several athletes have pulled out of an event plagued by filthy accommodation, shoddy construction and security fears. The Indian government is rushing against time to ensure all is ready before the opening on Oct. 3.

"There is still a lot of work to be done and it's not over yet," Michael Fennell told a news conference a day after he visited the Games Village. "What is of great concern is the safety and security of athletes and officials. There will be full participation in the Games. All 71 countries will be attending."

The Games, held every four years for mostly former British colonies, are estimated to have cost $6 billion. Asia's third-largest economy was awarded them in 2003 but did not begin proper preparations until two years ago.

India had hoped to use the Games to display its growing global economic and political influence, rivalling neighbour China which put on a spectacular 2008 Beijing Summer Olympics.

Instead, they have become a major embarrassment for the world's largest democracy where infrastructure projects have remained slow paced and a drag on economic growth.

"A lot of damage has been done to India as a country," Fennell said.

Fennell said the work that needed to be done was quite extensive.

"These centre around the clean-up of the (Games) village ... You can see where there has been water in the basement, and this has proven very difficult to remove," he said.

While the Indian Organising Committee has been at the receiving end of much of the flak, there is rising criticism of of the Commonwealth Games Federation as well.

Fennell said much of the problem was because of the Organising Committee's failure to understand the complexities of holding the event in India. "We all must share the blame," he told the CNN-IBN news channel in an interview.

The first batch of athletes arrived in India for the Commonwealth Games on Friday, opting to stay at a hotel instead of unfinished accommodation.

English athletes stayed at a hotel on Friday but planned to move to the athletes village on Saturday. A bridge collapse and a suspected militant attack on two foreign visitors had thrown the Games into crisis.

The Delhi Games may turn out to be the most compromised since a 1986 boycott of the Games in Britain, when 32 nations stayed away because of then Prime Minister Margaret Thatcher's objections to sanctions against apartheid-riven South Africa.

Reuters reporters have also seen children working at Games construction sites, despite it being illegal to employ minors.