The attack was repelled and only one aircraft was damaged, said an air force spokesman, adding that the Minhas air base at Kamra, in central Punjab province, did not house nuclear weapons. 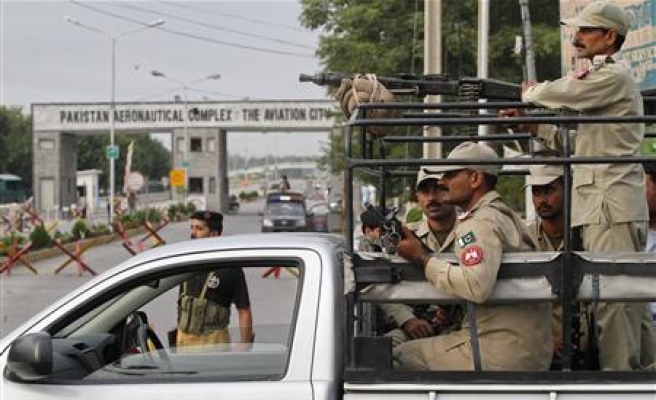 At least nine men, armed with rocket-propelled grenades and automatic weapons, have stormed an air force base in Kamra, northwest of the Pakistani capital, killing one security official, officials say.

The attack was repelled and only one aircraft was damaged, said an air force spokesman, adding that the Minhas air base at Kamra, in central Punjab province, did not house nuclear weapons.

"No air base is a nuclear air base in Pakistan," he said.

The gunbattle raged for hours, and eight men and one soldier were killed, the spokesman said. Commandos were called in to reinforce and police armored personnel carriers could be seen heading into the base.

The attackers moved through a nearby village under cover of darkness and climbed a nine foot (2.7 meter) wall strung with barbed wire to break into the base. Some were wearing military uniforms.

Base commander Air Commodore Muhammad Azam, who led the operation against the attackers, was shot in the shoulder, but is in stable condition, said spokesman Captain Tariq Mahmood.

Search operations for any other suspects who may have been hiding in the complex after the attack had ended, he said.

It was not immediately clear how the attackers managed to enter the sprawling base this time. Although the attack took place at about 2 a.m. (2100 GMT Wednesday), it is likely many of the soldiers on the base were awake for prayers or breakfast during the holy fasting month of Ramadan.

Faheemullah Khan, a civilian who lives near the base, said he was at a mosque praying when he heard gunfire and explosions which he thought were military exercises.

"Then we came to a restaurant, which is next to the main entrance to the base, and heard a louder explosion," he said.

"We saw six police vans rush in, and realized something was wrong."

Several squadrons of fighters and surveillance planes are believed to be based at Minhas.

"One body of a suicide bomber strapped with explosives has been found close to the impact area," said an air force statement.