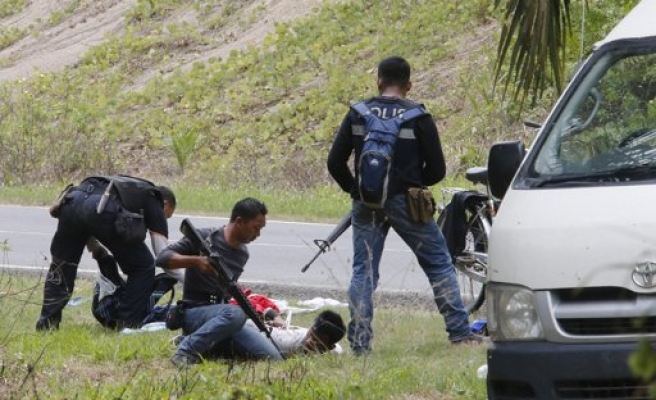 Philippine naval patrol boats have joined Malaysian forces in searching for gunmen suspected of killing a police officer and kidnapping another during an attack in Malaysia’s Sabah state.

A police intelligence officer, who spoke with the Anadolu Agency on condition of anonymity Sunday as he was not authorized to talk to media, said that boats had taken off from the southern Philippines provinces of Sulu and Tawi-Tawi to join the hunt for gunmen who attacked a dive resort on Mabul island late Saturday.

"Apparently there was a request from Malaysia to help track down the perpetrators," the intelligence officer added.

He said military forces in Sulu and Tawi-Tawi had received a "directive" from capital Manila to coordinate with their Malaysian counterparts to track down the attackers, who are believed to have fled to either of the provinces.

Abdul Rashid Haron, head of Eastern Sabah Security Command, had told media earlier that eight gunmen had ambushed marine police officers at the resort before fleeing with an officer on a boat seen heading toward the southern Philippines.

Capt. Ma. Rowena Muyuela, spokesperson for Western Mindanao Command - which has operational control of the Sulu area, declined to answer questions on whether the Abu Sayyaf were responsible for the attack.

A curfew and travel restrictions have been announced in Sabah’s high-risk areas.

Saturday's kidnapping marked the fourth in the state since April.

Last month, two armed men on speedboat abducted a Chinese fish breeder and his Filipino worker from their farm.