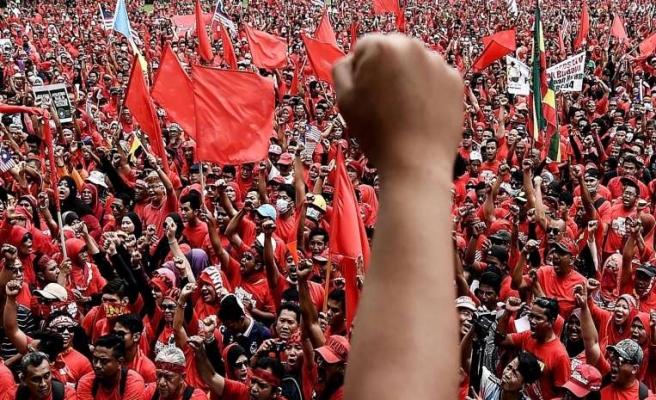 Water cannons were used to disperse Wednesday's "Red Shirt" pro-government demonstrators after around 2,000 ethnic Malays from a crowd tens of thousands strong tried to cross police lines into a Chinese business district.

He claimed to be shamed and disgusted at anti-Chinese slogans at the rally, saying they had tainted celebrations for Malaysia Day.

"Is this UMNO’s best idea for restoring Malay dignity? Bussing in thousands of plantation farmers and party members from the states and setting them loose like an angry lynch mob?" he said.

"Is this UMNO’s best idea of shoring up support for the prime minister? Whipping up anti-Chinese... sentiment and engaging in acts of provocation?"

She emphasized that the rally had ended with little incident, barring the firing of water cannons on unruly Malay protesters.

“Now people have got what irks them out of their hair, off their chests and have been able to get rid of whatever hatred they might have," she said.

Police had initially banned the rally from taking place, given issues of security and public order, but later relented.

Lim said the Razak administration should apologise for allowing the rally to take place and for appearing to be proud of yesterday's gathering.