Malaysian opp. leader to seek vote of no confidence in PM 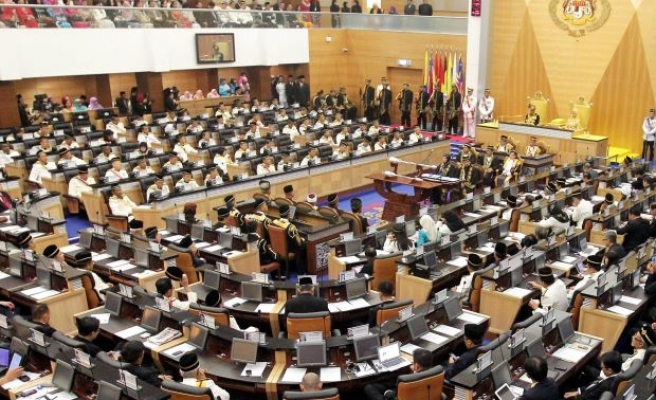 Malaysia's opposition leader said Monday she would seek a parliamentary vote of no confidence in Prime Minister Najib Razak, who faces fierce scrutiny over corruption allegations.

Wan Azizah Wan Ismail said she would submit the motion on behalf of the three-party opposition coalition "within the next few days", seeking to call Najib to account over a scandal that has roiled Malaysian markets and battered the government's image.

"We have to save our country," Wan Azizah, the wife of jailed former opposition leader Anwar Ibrahim, told reporters on the sidelines of parliament as it reconvened Monday.

Malaysia has been gripped by political crisis for months over allegations of massive sums missing from a state-owned company Najib launched, and the revelation that nearly $700 million in mysterious deposits were made to his personal bank accounts.

Opposition figures warned, however, that bringing the motion to a vote was a long shot given the sway that the powerful ruling coalition holds over parliament.

A low-ranking opposition parliamentarian had submitted a similar motion at the weekend but it has been withdrawn in favour of Wan Azizah's, opposition figures said.

Multiple Malaysian investigations into the scandal have apparently stalled after Najib in July shuffled his cabinet to purge critics and replaced the longtime attorney-general with his own appointee.

But regulators in the United States and elsewhere are reportedly scrutinising the complex money flows. Authorities in Switzerland and Singapore have previously said they have frozen millions of dollars in funds as they probe possible money-laundering and other crimes.

Najib appeared briefly in parliament Monday, which met for the first time since the revelation in July of the deposits into his accounts.

Opposition members said the government-controlled parliamentary apparatus had rejected a number of questions they wanted Najib and the state company, 1Malaysia Development Berhad (1MDB), to answer on the floor of the legislature.

Najib and 1MDB have fiercely denied any wrongdoing.

The premier's allies say the bank transfers were "political donations" from an unidentified Middle Eastern source, refusing to provide details.

But Najib is battling for his political life, and analysts warn the affair could spell future defeat for the 58-year-old ruling coalition, which is one of the world's longest-serving governments but is steadily losing support due to recurring corruption and other criticisms.

Adding to the pressure, Malaysia's nine state sultans said in a rare joint statement earlier this month that the scandal had created a "crisis of confidence" and called for a full investigation.

Najib's government had already faced criticism both at home and abroad for jailing Anwar for five years on controversial sodomy charges in February, a case the US State Department said raised questions over rule of law.