Protesters have blocked off the central square with estimates of up to 200,000 people gathering to protest against Malaysian Prime Minister Najib Razak. 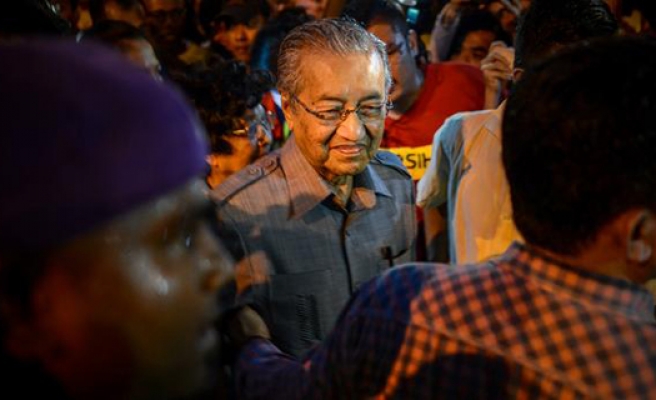 Malaysia's former leader Mahathir Mohamad made a surprise appearance on Saturday among tens of thousands protesting to demand the resignation of the prime minister over a multi-million-dollar payment into an account under his name.

The rally in Kuala Lumpur brought into the streets a political crisis that has raged since reports in July that investigators probing the management of debt-laden state fund 1MDB had discovered the transfer of more than $600 million.

Prime Minister Najib Razak, who denies wrongdoing, has weathered the storm and political analysts doubt the two-day rally will force him out of power.

However, the brief evening appearance of the deeply respected 90-year-old Mahathir, once Najib's patron and now his fiercest critic, thrilled the protesters and could add momentum to their anti-government movement.

Security was tight and anti-riot trucks and a water cannon were parked near a square where protesters had planned to converge. In the end, they hung back behind barricades.

Pro-democracy organisation Bersih, which organised the rally in Kuala Lumpur and the two main cities on Malaysia's side of Borneo, said the crowd in the capital swelled to 200,000 at its peak.