Man killed in attack on mosque in southern Thailand

﻿A 66-year-old man died after being hit by five bullets at mosque in Thailand’s Muslim majority south. 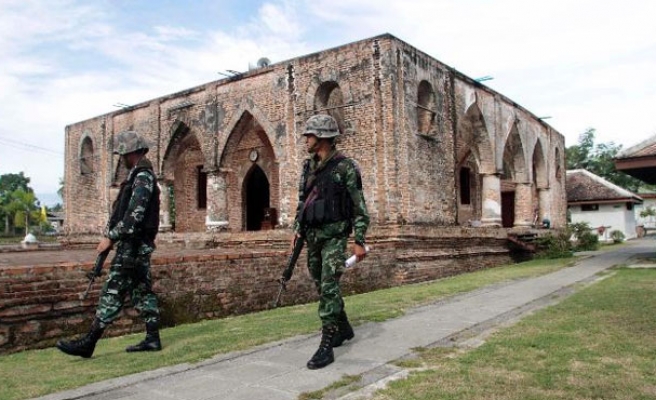 After a tragic start to the holy month of Ramadan, Thailand's Muslim majority south was again shaken by violence on Monday when a man was shot inside a mosque in Pattani province.

Police Colonel Banyawat Petrachum, the chief of Panare police station, said that an unknown number of attackers shot inside a mosque where villagers were praying early on Monday morning.

A 66-year old who was hit by five bullets died instantly. Another man was wounded and taken to a hospital.

There is no indication as of yet about which group the attackers - who fled the scene - belong to.

Close to midnight on Saturday, two policemen were killed in an ambush in Narathiwat province’s Tak Bai district, which has been highly sensitive ever since over 80 Muslims youths died in October 2004 at the hands of the military.

Sunday - the first day of Ramadan in Thailand - witnessed two bomb explosions in Narathiwat’s Ran-ngae district, and the shooting of a villager in Yala province and an assistant village chief in Pattani province.

Ramadan – the Muslim month of fasting - is a period of increased insurgent violence in southern Thailand. The Thai military and police have reinforced security, setting up checkpoints on main roads and at the entry and exit points of municipal areas.

In several instances in the past, attacks on mosques or on Muslim religious leaders have been proven to be the work of rogue security forces under cover.

Thailand's military government is to revive talks aimed at bringing peace to the troubled south, where Muslim separatists have fought the government for over a decade, a senior military official said on Monday.

"The talks are still alive but the details must be fleshed out so that we can move forward and draw up a road map to peace," Udomdet told reporters. "Thailand trusts Malaysia as the mediator. We must prepare details to go into the talks."

Thailand is predominantly Buddhist but parts of the south, in particular the three southern provinces of Pattani, Yala and Narathiwat, are majority Muslim and resistance to central government rule has existed there for decades.

Attempts by the state to impose Buddhist Thai culture on the region and Thai language in schools have only helped to create animosity on both sides.

Successive governments have failed to bring an end to the violence, which includes shootings, beheadings, bombings and arson attacks. Rights groups say both the rebels and the Thai army have committed war crimes.

The recently ousted government of Prime Minister Yingluck Shinawatra began peace talks last year with the BRN, or National Revolutionary Front, in Malaysia although critics said the meetings did not have the support of all rebel groups.

The talks soon collapsed and efforts to revive them were put to one side while Yingluck's government focused on containing street demonstrations designed to topple her from last November.

She was ordered to step down by a court in May after being found guilty of abuse of power and Thailand's military seized power in a bloodless coup on May 22.

Some had feared the new military rulers would resurrect more aggressive counter-insurgency tactics in what is already one of Southeast Asia's deadliest unresolved conflicts.