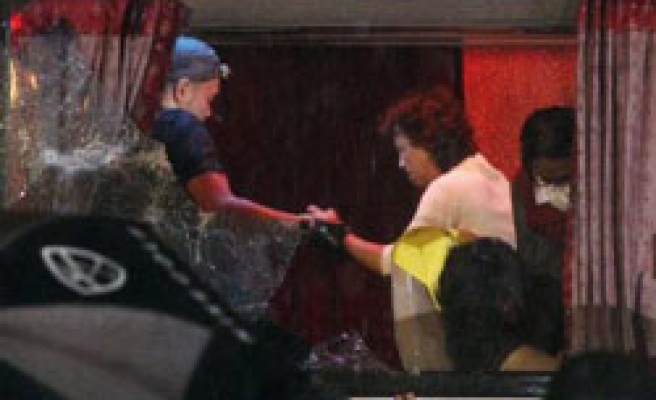 Philippine police shot and killed a sacked former policeman who was holding 15 Hong Kong tourists aboard a bus in downturn Manila on Monday and TV images showed some hostages leaving the vehicle alive.

The gunman, identified as 55-year-old former police captain Rolando Mendoza who was armed with an M-16 assault rifle, had stopped the bus, which initially had 25 people on board, across a wide road in Manila's biggest park.

"The hostage-taker was killed. He chose to shoot it out with our men," police Colonel Nelson Yabut told reporters.

"On our first assault, Captain Mendoza was sprawled in the middle of the aisle and shot one of our operatives. On our second assault we killed him."

Police could be seen removing a body from the front of the bus before entering the vehicle. The Red Cross said at least five hostages left the bus alive, but TV images also showed more bodies being removed. There were no more immediate details on casualties.

The end of the 11-hour drama came more than an hour after police commandos had moved in to break windows and surround the bus following a series of shots. The driver of the bus was seen running to safety after the first flurry of gunshots.

Mendoza had threatened to kill the hostages in a live telephone interview with a local radio station.

"I can see there are many SWAT teams arriving, they are all around," Mendoza, speaking in Tagalog, had said. "I know they will kill me, I'm telling them to leave because anytime I will do the same here."

For much of the day the gunman had appeared to be negotiating calmly with police and nine hostages, six Hong Kongers and three Filipinos, mostly women and children, had been released in stages.

Mendoza had asked for food for those remaining on the bus, which was delivered, and fuel to keep the air-conditioning going during the heat.

Mendoza's brother, Gregorio, told a local TV station that his brother was upset by his dismissal from the force. Local media said he had been sacked for reasons including extortion, and due to his sacking he had lost his retirement benefits.

"His problem was he was unjustly removed from service. There was no due process, no hearing, no complaint," said Gregorio, who was later taken into custody by police.

Stuck to the bus door was a piece of paper with the handwritten message: "BIG MISTAKE TO CORRECT A BIG WRONG DECISION". A larger piece of paper on the front windshield was headed "RELEASE FINAL DECISION" and then what appeared to be details of his case.

A spokesman for the Chinese Embassy said it wanted police to "take all the necessary measures to secure the release and to protect the security and safety of our nationals".

Hong Kong's Secretary for Security Ambrose Lee told reporters authorities were very concerned about the incident. Two officials were being sent to Manila and a hotline was being set up in Hong Kong for families of the hostages.