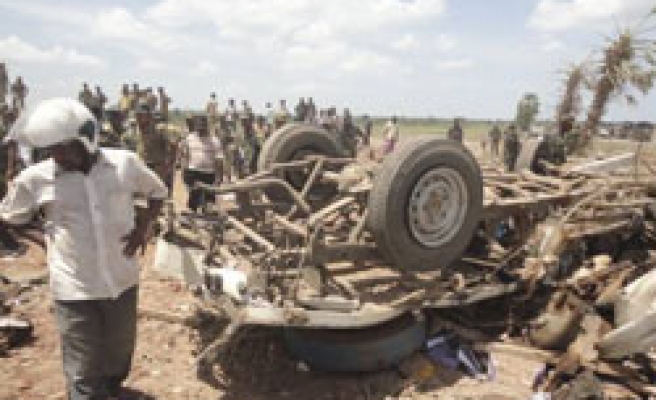 Three trucks carrying explosives blew up inside a police compound in eastern Sri Lanka on Friday, killing at least 25 people in what the military called an accident.

The blast occurred in Karayinadaru, about 50 km from the eastern port of Batticaloa and in an ethnically mixed area controlled by the Tamil Tiger separatists until 2007.

Earlier, he had given a death toll of 60 killed, saying most were police officers. He did not elaborate on why the death toll had been reduced by more than half.

At least 52 were wounded, with three dying in hospital, P. Murugananda, director at Batticaloa General Hospital, told Reuters by telephone.

Two Chinese employees of a Chinese construction company doing road work in the area were among the dead, he said. The trucks were parked inside the compound around the police station in Karadiyanaru, he said.

The Chinese ambassador to Sri Lanka, Yang Xiuping, was headed out to inspect the blast site, the official Chinese news agency Xinhua reported.

Pictures on local TV showed a building with two sections of wall collapsed into piles of rubble, the twisted wreckage of the trucks and bodies strewn on the ground.