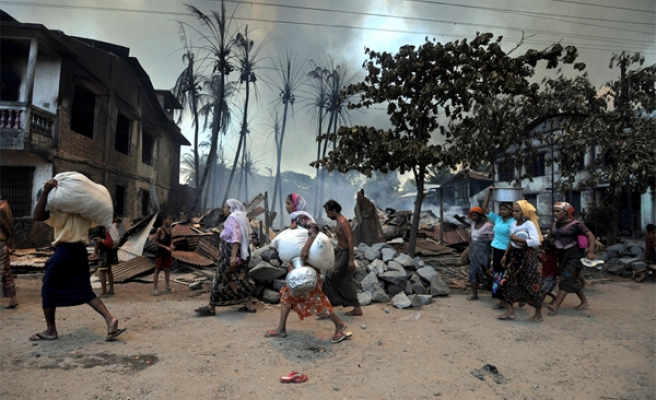 According to newly released satellite images, at least 288 Muslim villages have been partially or totally destroyed by fire in Myanmar's Rakhine State since Aug. 25, the Human Rights Watch said Tuesday.

The rights group said they monitored and analyzed 866 villages in Maungdaw, Rathedaung, and Buthidaung townships in Rakhine and found that the most damaged area was Maungdaw, adding the destruction encompassed tens of thousands of structures, primarily homes inhabited by ethnic Rohingya Muslims.

"The Burmese military destroyed hundreds of Rohingya villages while committing killings, rapes, and other crimes against humanity that forced Rohingya to flee for their lives."

The HRW said that 62 percent of all villages in Maungdaw township were either partially or completely destroyed, with about 90 percent of the destruction happening between Aug. 25 and Sept. 25.

The group noted that at least 66 villages were burned after Sept. 5, which was announced by Myanmar's de facto leader Aung San Suu Kyi as the date on which the security force operations ended.

Robertson said the "shocking images of destruction" in Myanmar and "burgeoning refugee camps in Bangladesh" were "two sides of the same coin of human misery being inflicted on the Rohingya".

"Concerned governments need to urgently press for an end to abuses against the Rohingya and ensure that humanitarian aid reaches everyone in need," he added.

Since Aug. 25, some 582,000 Rohingya have crossed from Myanmar's western state of Rakhine into Bangladesh, according to the UN.