More than an estimated 40,000 gather in Kuala Lumpur for two-day rally to demand resignation of Najib Razak over corruption scandal. 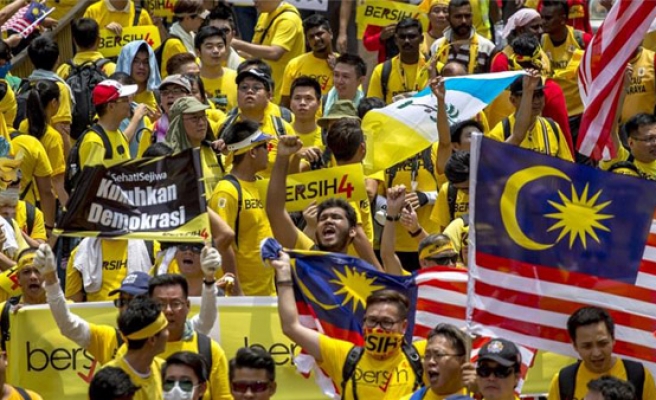 Protesters are gathering in the center of Malaysia’s capital for a rally -- already declared unlawful -- demanding institutional reforms and the ouster of Prime Minister Najib Razak.

While the protests organized by electoral reform group Bersih ("clean" in Malay) were set to officially kick off at 2 p.m. (0600GMT) Saturday, groups of participants had flocked to major landmarks in Kuala Lumpur in the morning.

An Anadolu agency reporter at the scene said that around 2,000 people joined the rally at the city center as of press time.

Roadblocks have been set up along major roads leading to Kuala Lumpur, with police instructed to stop cars carrying more than three people wearing yellow -- the signature color of Bersih -- to prevent them from joining the rallies.

Earlier this week, Military Chief General Zulkifeli Mohd Zin had said the military was prepared to intervene in this weekend's 34-hour rally if the government declared a state of emergency, sparking concerns of an outbreak of violence.

The government banned Bersih's yellow T-shirts and logo Friday, days after blocking access to the group's website as well as other sites seen as promoting or sharing information about the rally.

The weekend rally is planned to be held simultaneously in the cities of Kuala Lumpur, Kuching and Kota Kinabalu -- as well as major cities worldwide.

Bersih's chairwoman, Maria Chin Abdullah, had told Anadolu Agency that participants would be joining in the march to press for institutional reforms, the freedom to protest, measures to save the economy and a clean government and political system.

Likening the rally to a "vote of no-confidence against Razak", she said Friday that they expected more than 40,000 supporters in Kuala Lumpur alone amid "record queries and sales of yellow T-shirts."

Many Malaysians from all walks of life are demanding the resignation of Razak over allegations of graft and financial mismanagement at debt-laden state fund 1Malaysia Development Bhd (1MDB), and a multi-million-dollar donation made into his personal account.

1MDB is 42 billion Ringgit ($11 billion) in debt, and Razak is chair of its advisory board.

Kuala Lumpur's police chief, Comm. Md Tajuddin Md Isa, has warned that any violence during the march would "be dealt with sternly".

"Let me be very clear. Don't go overboard or resort to violence," he said, according to the Star online. "We will not tolerate instigators who inflame situations and make it worse."