Heavy monsoon rains have swelled mighty Himalayan rivers, which broke their banks in the states of Uttar Pradesh, Bihar and Uttarakhand. 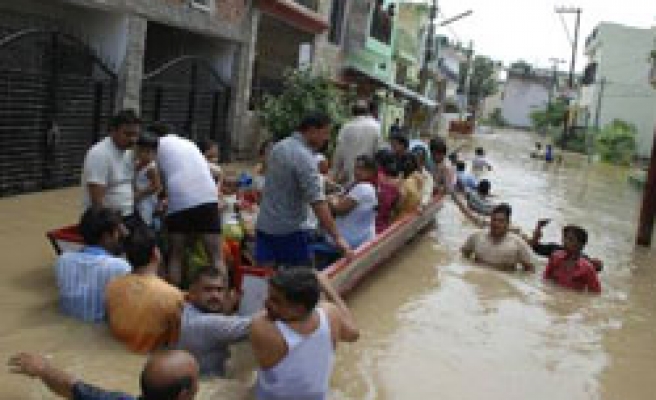 More than 3 million people in northern India have been affected by floods that have washed away homes, swept through holy sites and damaged crops as the authorities step up efforts to contain the damage.

Heavy monsoon rains have swelled mighty Himalayan rivers, which broke their banks in the states of Uttar Pradesh, Bihar and Uttarakhand.

The waters have ravaged 500,000 hectares of farmland in Uttar Pradesh, the top cane growing state, prompting the government to cut by around a tenth its sugar output projections for the harvest season beginning in October.

People waded through chest deep water, travelled on bullock carts or on boats to reach safer areas, carrying children and household belongings in their hands and on their heads. In relief camps, they complained of a lack of food and medicines. In Uttarakhand, where the army was called in after the Hindu holy river Ganges rose to near the danger level by the sacred town of Haridwar, 500,000 people were affected by the floods, said Mahendra Negi, a disaster management centre official.

On Tuesday Sonia Gandhi, the powerful chief of the ruling Congress party, flew over the submerged districts and asked Prime Minister Manmohan Singh to offer liberal financial aid to the affected states, the party said in a statement.

UNICEF said 1.7 million people have been affected in Uttar Pradesh and 1 million in Bihar. Both are poor states and Uttar Pradesh is also the most populous with 190 million citizens. More than 300,000 people were forced out of their homes.

"It is quite concerning. The number of affected people (in Uttar Pradesh) could rise to 2 million. This flood is worse than 2007 floods," Amit Mehrotra, UNICEF Emergency Programmes Officer in the state, told Reuters.

Sugar industry officials said the floods would not alter the supply scene in India, the world's top consumer and second-largest producer of the sweetener, as the production loss would be made up by other states and by stocks in warehouses.

In Bihar, where the Gandak river burst through its embankments in various places and flooded villages, houses were invaded by stray dogs, snakes and scorpions.

"They are perched atop almirahs, in closets, in the kitchens and even in mud utensils. It's hell," 45-year-old Rupdeo Mahto told reporters in the flood-hit Gopalganj district.

Floods in India affect more than 40 million people each year on average, causing losses of $575 million and damaging crops in 3.7 million hectares. But the June-September monsoon is also vital to the country's farm output and economic growth.

The Ganges, a dip in which Hindus believe washes away sins, and its tributary rivers have risen to close to their record-high levels and weather officials have forecast more heavy rain.

As floods remain a matter of concern in Bihar, which goes to the polls next month to elect a new assembly, the election commission of India is considering relocating some polling stations or setting up mobile ones for voters.

India's monsoon may not start withdrawing this week and with the weather department predicting more rain, state governments have been asked to gear up to cope with risk of heavy flooding.