Dressed all in white, he was flanked by his top aide, Amit Shah, who was briefly banned from campaigning over inflammatory comments against Muslims he made this month 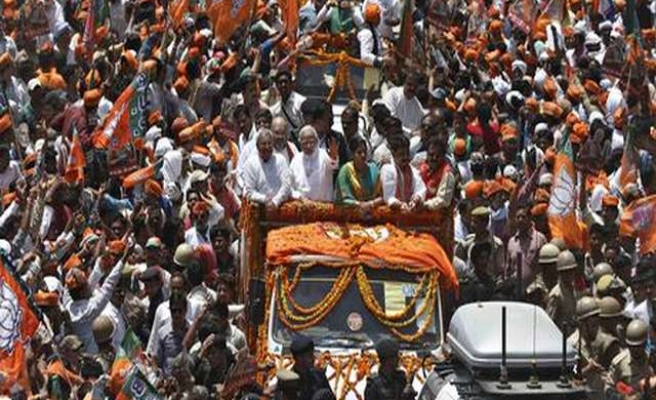 India's Narendra Modi received a hero's welcome from thousands of orange-clad supporters as he launched his election campaign on Thursday in the religious city of Varanasi, a show of strength for the Hindu nationalist tipped to be prime minister.

India is halfway through the world's largest-ever election, in which 815 million people are eligible to vote over 10 stages. Modi will stand for the parliamentary seat of the Ganges river city of Varanasi on May 12, four days before results are due.

One of the world's oldest inhabited cities and a centre for Hindus who come to wash away their sins in the sacred river, Varanasi should give Modi an easy win.

But with a sizeable Muslim community and multiple Hindu castes, the city and surrounding region will test whether he can rise above divisions that have held back his party in the past.

In a nod to that challenge, and to blunt criticism that his politics favours only upper-caste Hindus, Modi made conciliatory comments towards other religions and took a lower-caste Ganges boatman with him to register as a candidate.

"I am getting the privilege to serve this place, my heart says I have not come here, mother Ganges has called me," said Modi, 63.

Waving from an open-topped truck under a scorching sun, Modi was greeted by supporters dancing on rooftops and flapping flags as his cavalcade inched its way to an office where he filed to run for the opposition Bharatiya Janata Party (BJP).

"The support he is getting is unprecedented, it will make history," said Pratik Gupta, a trader wearing a "Modi for PM" cap in the party's orange and a white cotton suit.

In the sixth phase of the election on Thursday elsewhere in India, just over 180 million people were registered to vote in polls pitting the pro-business Modi against the decade-old centre-left government and a spectrum of regional parties.

Opinion polls show a coalition led by Modi's BJP is likely to win enough of the 543 parliamentary seats to form the next government, but may need the support of other regional parties.

Modi's coalition is aiming to win half the seats on its own, but could be held back by those who blame him for religious strife in his home state of Gujarat in 2002, when more than 1,000 people died, most of them Muslims.

He remains a deeply controversial figure for many Indians after riots in Gujarat, shortly after he came to power. Dressed all in white, he was flanked by his top aide, Amit Shah, who was briefly banned from campaigning over inflammatory comments he made this month in an area hit by anti-Muslim riots last year.

This week, he said he would rule for all Indians, not just Hindus, after those inflammatory comments.

One in six of Varanasi's voters are Muslim, and many say they will support Arvind Kejriwal, a Delhi-based anti-corruption campaigner who filed his nomination on Wednesday.

"Modi is a very bad man, we don't like him and he will destroy the country," said Fayaz Ahmad, watching Kejriwal drive by atop a black jeep. Kejriwal led the state government in Delhi briefly after a stunning electoral debut late last year.

Modi's decision to contend from Varanasi was partly aimed at shoring up the BJP's support in the east of Uttar Pradesh, a state with a population larger than Brazil that sends the largest number of members to parliament.

Caste, the Hindu system of classifying people by bloodline, remains a potent force in Indian politics and society and people often vote for candidates from their own community. That is particularly true in poorer northern states where lower-caste movements have dominated electoral politics for a generation.

Modi's promises of strong governance and jobs have won him supporters across large swathes of India, even among lower castes traditionally hostile to the party.

But analysts caution that voting along caste lines remains strong in rural Uttar Pradesh and neighbouring Bihar, and - taking no chances - the BJP has joined hands with Apna Dal, which represents a low caste of farmers in the Varanasi region.

"The caste system is not going away, it has been there for 3,000 years," said Dipak Malik, director of the Gandhian Institute of Studies in Varanasi. "If Mahatma Gandhi could not get rid of it, neither will Modi."