India does not support Western sanctions against Russia, but the Crimean leader's presence may prove an irritant before U.S. President Barack Obama visits India next month. 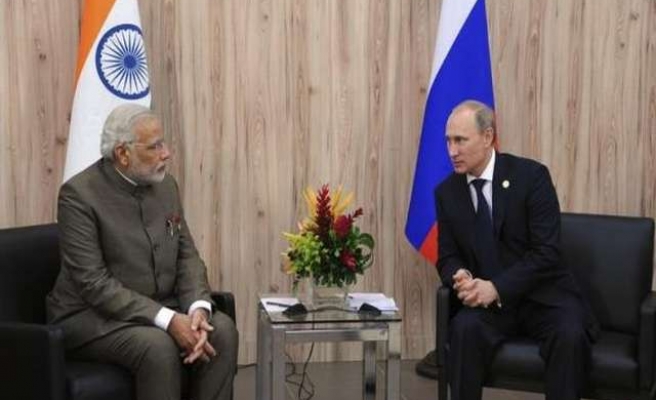 Indian Prime Minister Narendra Modi told President Vladimir Putin on Thursday that Russia will remain India's top defence supplier, even though New Delhi's options had improved since the end of the Cold War.

Modi spoke after a one-day summit that sought to revive a relationship that peaked in the Soviet era, while the two sides signed billions of dollars in deals covering nuclear power, oil and defence cooperation.

In the most significant ones, state-owned Rosatom will build 12 nuclear reactors in India, energy major Rosneft inked a 10-year crude supply deal with Essar Oil and Russia promised to build advanced helicopters in India.

"Even if India's options have increased, Russia remains our most important defence partner," Modi, 64, told reporters after the first formal summit between the leaders since Modi won election by a landslide in May.

Putin's visit comes as the Kremlin grapples with a sliding oil price and weak economy that have deepened the impact of Western sanctions over its annexation of Crimea last spring and support for an uprising in eastern Ukraine.

The tension over Ukraine intruded on the choreographed visit when it emerged that the Russian-backed leader of Crimea had travelled as part of Putin's delegation for what were billed as unofficial talks to enhance trade.

"We highly appreciate the friendship, trust and mutual understanding with Indian partners," said Putin who touched on bilateral issues chiefly in his statement to journalists. No questions were allowed.

The two leaders presided over the signing of a "vision" document setting out a roadmap for cooperation in the sphere of nuclear power. Putin said Russia could eventually supply India with 20 nuclear reactors.

In the event, state-owned Rosatom said that under an agreement signed on Thursday it would supply 12 nuclear energy reactors for India over 20 years.

A 1,000-megawatt reactor is operating at the Russian-built Kudankulam power station in south India, with a second due onstream in 2015.

Indian officials say a total of six reactors will be built at Kudankulam, with a further six to follow at a site that has not yet been determined.

On defence, the two sides will seek to move ahead with long-delayed projects to develop a joint fifth-generation fighter jet and a multi-role transport aircraft, in addition to the advanced helicopter cited by Modi.

A spokesman for India's foreign minister said he was not officially aware of Crimean leader Sergey Aksyonov's visit.

But Gul Kripalani, a Mumbai businessman who met the Crimean leader at a New Delhi hotel, told Reuters the talks were unofficial and Aksyonov had travelled to India as part of Putin's delegation.

Western countries imposed sanctions on Russia over the annexation of Crimea in February and the Kremlin's support for an uprising by pro-Russian rebels in eastern Ukraine.

India does not back Western sanctions against Russia, but the unofficial trip by Sergey Aksyonov could spoil the mood before Prime Minister Narendra Modi hosts U.S. President Barack Obama for India's Republic Day festivities in January.

Aksyonov arrived at the upscale Oberoi hotel accompanied by Russian diplomats to be greeted by Gul Kripalani, a Mumbai-based seafood merchant who wants to boost trade with Russia.

Speaking to reporters after signing a memorandum of understanding to promote business, Aksyonov said his visit had "a private character" and he did not take apart in any official events.

He tweeted separately, however, that he had come to India as "a member of the delegation under the leadership of the president of the Russian federation, Vladimir Putin".

The towering 42-year-old, previously an obscure nationalist politician, was elected in a closed session of the regional parliament after Russian forces in February took control of the Crimean peninsula in a bloodless operation.

He masterminded a quickfire referendum to join Russia that was recognised by Moscow. Kiev and the West say it was rigged.

It was clear that his visit enjoyed Russia's full diplomatic backing, with the consul general to Mumbai and an aide to Ambassador Alexander Kadakin present at the meeting and lunch with businessmen.