Hundreds of houses collapsed across the Himalayas, and villagers dug with their hands in the rubble in search of the missing. 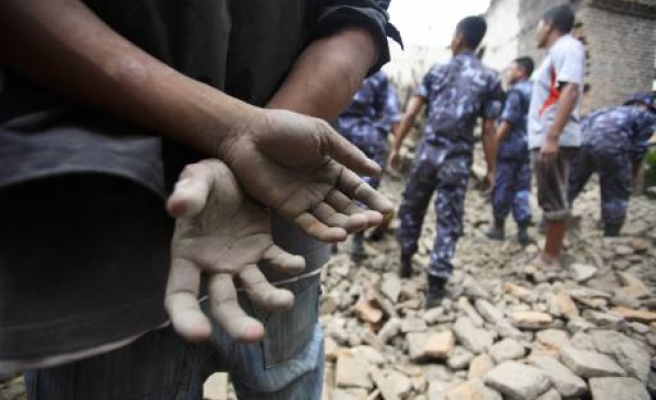 Air force helicopters flew rescue workers to a remote Himalayan region on Tuesday in search of survivors of a strong earthquake that killed dozens of people in India, Nepal and the Chinese region of Tibet.

Most of the casualties were near the epicentre of Sunday's 6.9 magnitude quake that bucked roads and knocked down houses in the sparsely populated India state of Sikkim, popular with trekkers for its Buddhist monasteries and spectacular trekking.

Landslides, rain and fog hampered rescue work for a second day, with high mountain passes to the worst affected region blocked by rocks and mud. But a break in the clouds allowed army helicopters to fly a few rescuers to Mangan , a hard-hit small town ringed by snow-capped mountains near the epicentre.

Hundreds of houses collapsed across the Himalayas, and villagers dug with their hands in the rubble in search of the missing. Soldiers found five more bodies in Sikkim on Tuesday.

The quake killed at least 82 people. The Indian government confirmed 50 deaths in Sikkim and 18 in other states. At least seven people died in Nepal and seven more in Tibet.

With soil waterlogged after days of rain, fresh landslides blocked the main access to the state overnight, leaving many of the hundreds of rescue workers deployed from New Delhi unable to reach the worst-hit areas.

For centuries a rarely visited Buddhist kingdom known for the world's third highest peak on its border with Nepal called Kangchenjunga and glacial lakes, Sikkim joined India in 1975. With 600,000 residents, it is the least populated state and borders Bhutan, Tibet in China and Nepal.

The state's economy boomed in recent years as it opened up to tourism and trade with China. Residents say landslides are a threat to hastily built new buildings in its mountain towns.