More than 2 million acres of farmland in Thailand are now under water, an area 11 times the size of Singapore. 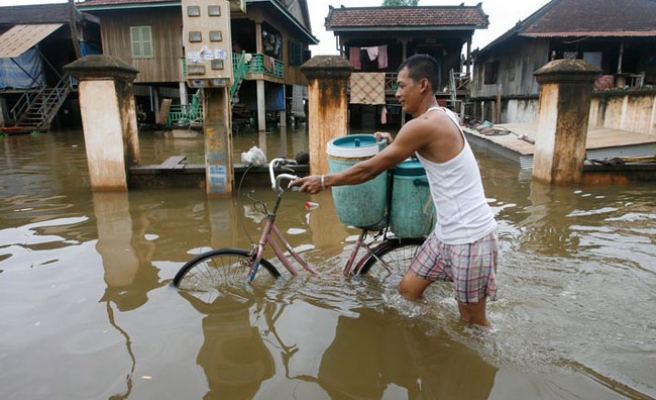 The death toll from flooding in Thailand since mid-July has risen to 158, while 61 people have died in neighbouring Cambodia in the past two weeks, authorities in the two countries said on Monday.

More than 2 million acres of farmland in Thailand are now under water, an area 11 times the size of Singapore.

"Twenty-three provinces in the lower north and central Thailand are under water and nearly 2 million people have been affected by severe floods and heavy rain," Thailand's Department of Disaster Prevention and Mitigation said.

Flooding has also affected the capital, Bangkok, which sits only two metres above sea level. The Chao Phraya river has overflowed into roads in some areas, although the authorities have reinforced its banks to prevent serious flooding.

The Meteorological Department warned 39 provinces, mostly in central and northeast Thailand, to be ready for possible flooding and heavy rain in the coming week.

Thailand's main rice crop of the year is normally harvested from October. According to media reports, some farmers have started harvesting early to try to get their crop in before floods hit, which could result in lower yields.

Some may be unable to harvest properly because fields are inundated.

Thailand is the world's biggest rice exporter. It is forecast to produce 25.1 million tonnes of unmilled rice in the main crop, up from 24 million last year.

Its monsoon season usually runs from August to October.

After a teleconference with governors in flood-hit areas, Prime Minister Yingluck Shinawatra said 40 billion baht ($1.2 billion) was expected to be used in long-term projects for flood prevention, but she gave no detail of the projects.

"The damage is now double," Nhim Vanda said. "We are worried that the water will go down slowly, which will destroy rice that is already planted."

Cambodia produces around 7 million tonnes of unmilled rice a year at the moment. Very little of it is directly exported. A great deal goes over the border to Vietnam to be milled and re-exported.