Ekmeleddin Ihsanoglu, head of the 57-member Organization of The Islamic Conference, announced Sunday that Muslims have pledged nearly $1 billion. 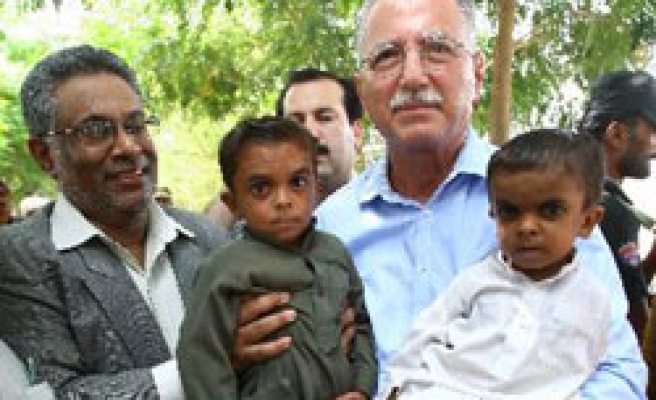 Muslim countries, organizations and individuals have pledged nearly $1 billion in cash and relief supplies to help Pakistan respond to the worst floods in the nation's history, the head of a group of Islamic states said.

The announcement came as floodwaters inundated a large town in Pakistan and authorities struggled to build new levees with clay and stone to prevent one of the area's biggest cities from suffering the same fate.

Ekmeleddin Ihsanoglu, head of the 57-member Organization of The Islamic Conference, announced Sunday that Muslims have pledged nearly $1 billion.

"They have shown that they are one of the largest contributors of assistance both in kind and cash," said Ihsanoglu of the various donors. He spoke during a joint news conference with Pakistani Foreign Minister Shah Mahmood Qureshi in Islamabad.

OIC head said the unprecedented floods have caused extensive damages in the country and the rehabilitation of over 20 million people is a test for the entire Muslim Ummah. He also assured of a continuous support to Pakistan from the OIC member states.

He said the OIC seeks political support from its member states for establishing an OIC Emergency Relief Fund to meet such disasters and the proposal would be discussed in the next OIC summit to be held in March 2011 in Sharmul Sheikh.

He informed the media that he would visit Multan and other flood affected areas to assess the situation.

Qureshi said, on the invitation of the Arab League, he would visit the Arab countries to get more aid for the flood victims.

A torrent of water threatening to deluge a major town in flood-hit Pakistan has begun to recede, officials said Monday.

Torrential monsoon rain has triggered massive floods that have moved steadily from north to south over the past month, engulfing a fifth of the volatile country and affecting 17 million of its 167 million people.

Southern Sindh is the worst-affected province, with 19 of its 23 districts ravaged as floodwaters swell the raging Indus river to 40 times its usual volume.

One million people have been displaced over the past few days and hundreds of thousands fled Thatta alone ahead of the approaching torrents.

The Flood Forecasting Centre said the Indus river at Kotri would "continue in exceptionally high flood level" for another 24 hours.

Eight million people have been left dependent on aid for their survival and floods have washed away huge swathes of the rich farmland on which the country's struggling economy depends.

The government has confirmed 1,600 people dead and 2,366 injured but officials warn that millions are at risk from food shortages and disease.

Now OIC is functioning with a goal. Thanks to its president Ekmeleddin Ihsanoglu. Turks should be proud about this.