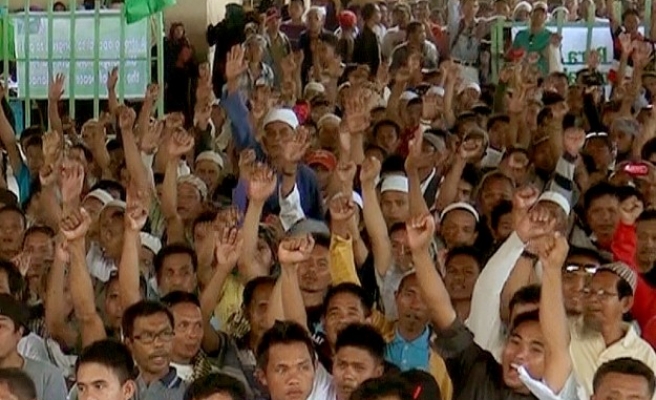 Muslims have held simultaneous peace rallies across Mindanao in the southern Philippines to voice their support and appeal for the immediate passage of the Bangsamoro Basic Law in the House of Representatives and the Senate.

Rallies were conducted Sunday in the cities of Isabela, Cotabato, Davao, General Santos, Pagadian, and Marawi, Muslims gathering on plazas, and in gymnasiums and halls.

Mass mobilizations and vigils were also held in Batasan and Quezon City, along with rallies on the islands of Jolo, Tawi-Tawi and the towns of Baloi in Davao del Norte, Isulan, Sultan, and Kudarat, North Cotabato, as well as in Metro Manila.

In Zamboanga - a Christian majority city in the Philippines predominantly Muslim Mindanao region - a rally was cancelled after the local mayor revoked the permit due to tensions in the neighboring area of Recodo.

On Saturday, a Muslim protester was shot dead in Recodo when local residents and workers for a logging firm fought over access to a local mosque.

Sunday's event was organized by the Mindanao Alliance for Peace, composed of different civil society groups in Mindanao.

Muslims in the south - also known as Bangsamoro - are pressing President Aquino to certify as urgent a bill on the law, which will form the basis for the creation of a political entity, or the new Bangsamoro autonomous set-up in Mindanao.

The draft of the law was submitted to Aquino a few days ago but has yet to be transmitted to Congress for deliberation.

The House of Representatives will convene May 5. Once passed and ratified, the law will usher in the dissolution of the Autonomous Region in Muslim Mindanao and replace it with the Bangsamoro entity. Political analysts say the law is a result of the Comprehensive Agreement on Bangsamoro, which embodies the justness and legitimacy of the cause of the Bangsamoro people.

Abdulmannan Gayak, who chairs the Mindanao Alliance for Peace, said they have strongly appealed for Congress to pass the law as soon as possible, amid feared delays in the deliberation of the law if there is a recess.

"We are strongly appealing to the Philippine Congress to pass it without undue delay," he said. "We do not want the negotiations to fail. We want the conflict that brings untold suffering and miseries to the people of Mindanao be put to a stop immediately."

Gayak also appealed that the fruits of the peace agreement be divided among the members of the new generation now.

"We want to make sure that the legacy we leave to our children and grandchildren is a society where peace and progress reign. A society where all the people, irrespective of religions, cultures, languages and tribes, line in an era of lasting peace, justice and prosperity," he said.