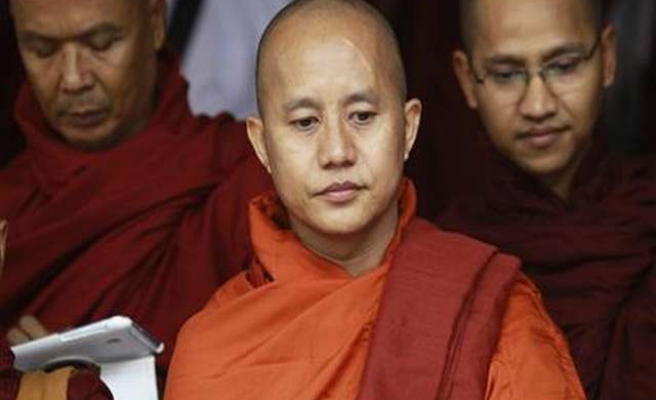 A radical monk who heads a movement accused of stirring violence against Muslims in Myanmar has announced a partnership with a hardline Buddhist group in Sri Lanka to defend their religion.

The declaration by Ashin Wirathu, who once called himself "the Burmese bin Laden", was the clearest signal to date of a push to spread the ideology of his controversial 969 movement beyond Myanmar to build a front against Muslims.

"Today, Buddhism is in danger. We need hands to be firmly held together if we hear alarm bells ringing," he told a convention that was held at an indoor stadium in the Sri Lankan capital, Colombo, on Sunday.

"I'd like to announce that 969 and I will join hands with Sri Lanka's Bodu Bala Sena to protect Buddhists all round the world," he said, referring to a group that has been accused of tyrannizing the minority Muslim community in Sri Lanka.

There was a sectarian clash in June in two Muslim-majority towns on Sri Lanka's Sinhalese-dominated southern coast during a protest march led by the BBS.

In his eight-minute speech, Wirathu thanked Sri Lankan President Mahinda Rajapaksa for granting him a visa, despite protests by some Muslim groups in the island nation. Critics fault the president for failing to rein in the BBS' activities.

Wirathu, escorted by black-clad special security personnel, was welcomed at the Buddhist convention by traditional drummers and sat in the front row amid thousands of local monks.

He told the gathering that "Buddhism was under siege, mainly from Muslims."

"It's the responsibility of the monks as Buddha's sons to teach bad and uncivilised people to become good and civilised," he said. "If there is danger in one place, other countries need to help and protect them."

He did not spell out how he would work with BBS.

The BBS convention was held amid mounting speculation that there will be an early presidential election in Sri Lanka, possibly as soon as January, in which Rajapaksa is expected to run for a third term.

BBS Secretary-General Galagoda Aththe Gnanasara said in a speech his group would dictate the outcome of the election and future of the country thanks to its grassroot support.

Each of the 5,000 monks at the convention should create a vote bank of 1,000 at village temples to secure 5 million Buddhist votes, he said.

The predominantly Buddhist Sinhalese account for 70 percent of Sri Lanka's population of 21 million.

The BBS also proposed a policy framework on Sunday under which Sri Lanka would be declared a Buddhist Sinhala nation rather than a multi-ethnic nation.