International panel of experts points out that language of hatred similar to that in Myanmar where hundreds are reported to have lost their lives. 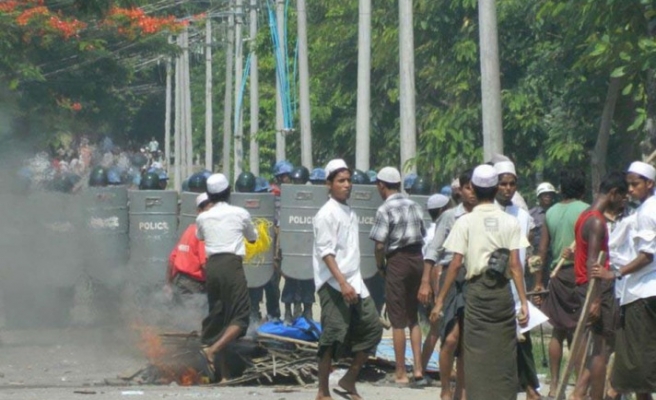 The anti-Muslim rhetoric of Sri Lanka is similar to that of Myanmar, an international panel of experts at a conference on violence in the two countries concluded this week.

Although no one has died in anti-Muslim violence in Sri Lanka, speakers at the March 6 discussion said that the language of hatred is similar to that in Myanmar where hundreds of Rohingya Muslims are reported to have lost their lives.

Held at the Central European University's School of Public policy in Budapest, "Buddhist Fury: violence against Muslims in Sri Lanka and Myanmar" sought to answer questions on conflict solution, develop policy ideas and share news on the current situation in both countries, with a purpose of releasing a policy paper to help deal with anti-Muslim hatred.

The audience heard that although Muslims make up just 9 percent of Sri Lanka's population, Buddhists, who number around 70 percent, appear to fear an increase in their population - fears which have also been expressed in Myanmar. But whereas violence in Myanmar has led to hundreds of deaths, attacks in Sri Lanka have been limited to mosques and the removal of Muslim women’s headscarves, with a few people injured.

Buddhist mobs in Myanmar have killed more than 200 Muslims and forced more than 150,000 people, mostly Muslims, from their homes. Many Rohingya Muslims now live in large camps in Sittwe, the capital of the Rakhine State in Western Myanmar.

Wirathu has denied any role in the violence, but critics have said that his anti-Muslim preaching has helped to inspire it. Like Bodu Bala Sena, he has criticized the halal slaughter method, and told Buddhists not to do business with Muslims, urging them to seize their land.

The government of Myanmar denies any massacre of Rohingya has taken place. A presidential spokesman, Ye Htut, in a recent interview with The Myanmar Times, described accusations that Rohingya have been persecuted as "baseless."

Dr Richard Horsey - a Myanmar adviser for both the International Crisis Group and Myanmar Peace Centre - said that Suu Kyi “had used her political capital on other unpopular causes, there is no reason she cannot speak up for the Rohingya.”

Suu Kyi - for long a beacon of the Human Rights community - has been criticized for not playing a role in raising attention to the Rohingya's plight and easing the hatred.

The panel discussed tactics used by extremist Buddhist groups and how widespread anti-Muslim language had become in the two societies.

Professor Robert Templer, Director of the Centre of Conflict Negotiations and Recovery, asked Richard Reoch, President of Shambala, a Buddhist organization based in London, why are Buddhists killing?

“It comes down to three factors,” answered Reoch. “Emotion, culture and identity.”

Reoch said that the three factors together could make people forget about their faith and carry out acts that are unbefitting to them, regardless of the faith of the individual.