Myanmar arrests 30 over killing of 10 Muslims

Police in Myanmar have arrested 30 people in connection with the Buddhist killing of 10 Muslims that helped spark days of sectarian violence in Rakhine state. 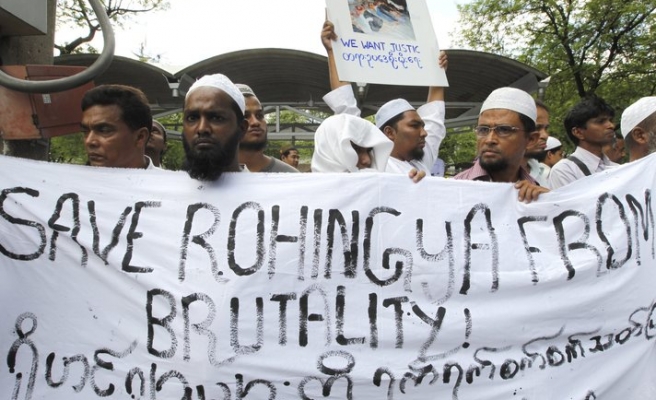 Police in Myanmar have arrested 30 people in connection with the Buddhist killing of 10 Muslims that helped spark days of sectarian violence in Rakhine state last month in which at least 80 people were killed and tens of thousands were displaced.

The 30 suspects were in detention and "action is being taken against them according to the laws", the New Light of Myanmar newspaper said on Monday, referring to the incident on June 3, when the Muslims were hauled off a bus, beaten and killed.

The 15-month-old administration says it wants to forge peace and unity among the many ethnic groups and religions in Myanmar. Northwestern Rakhine state in particular is fraught with longstanding communal tension.

The lynching of the Muslims was apparently retribution for the gang rape and murder of a Buddhist woman six days earlier, an attack they had no connection with.

Three Muslim youths were found guilty of murdering the woman. One committed suicide and the other two were sentenced to death on June 18.

The two incidents and the subsequent riots in Rakhine have drawn attention to the bad blood between ethnic Rakhine Buddhists and hundreds of thousands of Rohingya Muslims. Many of the latter have lived in the state for generations but are not recognised as citizens of Myanmar.

Thousands of Rakhines and Rohingyas fled the violence. Some of the Rohingyas, who are Muslims of South Asian descent, tried to escape by boat to neighbouring Bangladesh, but most were turned away. Bangladesh also refuses to recognise them as citizens.