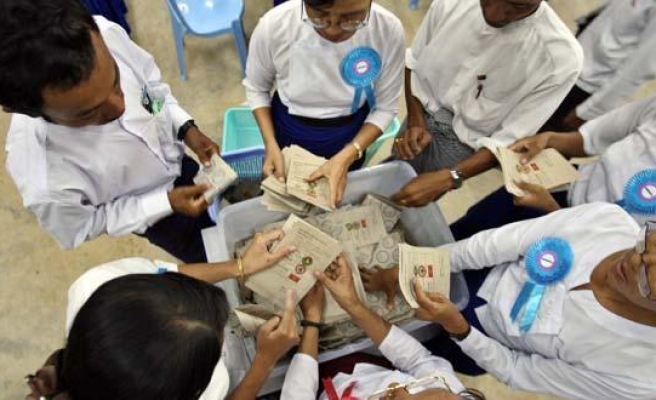 Myanmar’s election commission has rejected 17 candidates from a party supporting Rohingya Muslims ahead of a landmark poll on Nov. 8.

The candidates from the Democracy and Human Rights Party (DHRP) join dozens of others who have been blocked on citizenship grounds in what looks like a systematic attempt to exclude Muslims from the general election.

“There is a conspiracy against our party,” Kyaw Min, a Rohingya and the DHRP’s chairman, told Anadolu Agency on Thursday. “They want to exclude us from the political field.”

He added that his party would appeal the decision.

If the appeal is rejected, the DHRP will be forced to disband under a rule that requires political parties to field at least three candidates in an election.

Only one of the 18 DHRP members who applied has been accepted. Kyaw Min says Kyu Kyu Win, a Muslim, was allowed to stand only because her mother’s side of the family is Buddhist.

Late last month a prominent Rohingya Muslim MP called Shwe Maung was barred from running in November’s poll on the grounds that his parents were not citizens, a claim he denies.

At least 88 parliamentary hopefuls have now been rejected by election officials as of Tuesday, the Myanmar Times reported.

And the purge of Muslim candidates extends to the pro-democracy opposition party.

The National League for Democracy, led by Nobel Peace laureate Aung San Suu Kyi, rejected applications from at least a dozen Muslim candidates hoping to run on its ticket.

Ko Ni, a Muslim lawyer and NLD member, said the party’s failure to field a single Muslim candidate is an attempt to appease hardline Buddhists, the Irrawaddy website reported.

Hundreds of thousands of Rohingya Muslims lost their right to vote earlier this year when the government withdrew temporary citizenship documents, known as white cards, in response to protests by Buddhist nationalists.

The Rohingya are widely reviled in Myanmar and considered illegal interlopers from Bangladesh despite evidence many have roots going back generations.