Government says it has agreed to students' demands on education. 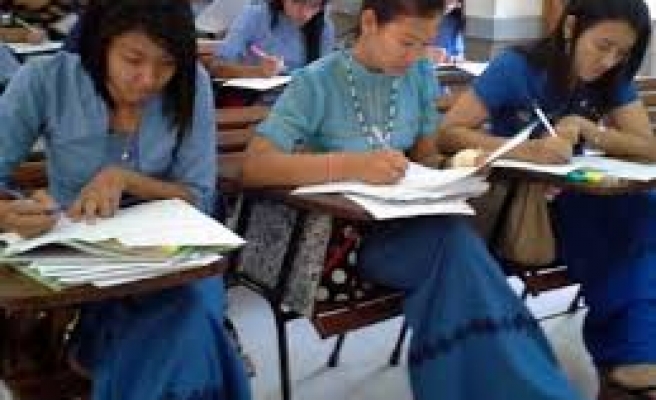 World Bulletin / News Desk
Myanmar’s government declared Sunday that student activists’ demands for education reform had “been fulfilled” and renewed calls for them to abandon their protests.

Students have been marching for weeks across the country towards the former capital of Yangon to change a law that they say will curb academic and political freedoms on campus.

On Saturday the government agreed during four-way talks to submit a draft law to parliament that addressed the students’ demands, which include greater university autonomy and more spending on education.

However, activists and supporters remain suspicious and a rift has emerged among their ranks over whether the students should continue marching to Yangon or wait to see if the government keeps its promise.

As a potentially historic general election approaches at the end of the year, the students’ unauthorised marches are testing the reformist credentials of Myanmar’s government, which took over from a military dictatorship in 2011.

“At the meeting the government agreed to everything,” Min Thu Kyaw, a student activist who attended the talks in Yangon, told The Anadolu Agency Sunday. “The problem is we don’t believe them. If we stop our movement, they might reject the law again.”

He added that a key group supporting education reform would urge protestors not to enter Yangon.

Representatives from the National Network for Education Reform, he said, “will go to students and try to stop them from entering Yangon because it could be dangerous.”

He added: “But the students want to enter Yangon because they want to make sure the education law will be approved. So it’s a dilemma now and it’s a crisis.”

No-one from the network could be reached by telephone Sunday.

The protests are reminiscent of a student-led 1988 pro-democracy uprising that was brutally crushed by the military junta, resulting in thousands of deaths.

A state television broadcast earlier this week warned protesters the government would “take action” to restore law and order if marchers tried to enter Yangon, raising fears of mass arrests or even violence.

Authorities have set up barricades on the outskirts of the city to block the marchers, news website Mizzima reported on its Twitter feed.