"This six-party summit is rather impractical," presidential spokesman Ye Htut said, "I don't think it can happen at the moment." 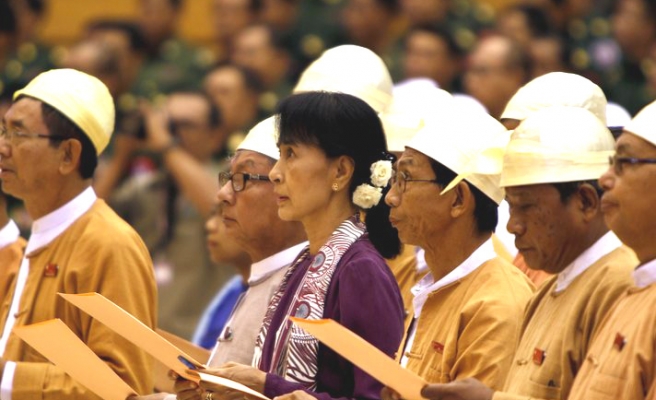 A summit of political leaders proposed by Myanmar's parliament to debate constitutional change is "impractical" and unlikely to happen, the president's spokesman said in a further setback to hopes for full democracy after 49 years of military rule.

A semi-civilian government took office in 2011 and undertook rapid series of reforms but the pace of change has slowed, raising international concern that the military is not yet ready to submit to the authority of a parliamentary democracy.

The military holds 25 percent of the seats in parliament, a barrier to the more than 75 percent vote margin required for constitutional amendments. The current constitution bars opposition leader and Nobel Peace Prize laureate Aung San Suu Kyi from becoming president.

"This six-party summit is rather impractical," presidential spokesman Ye Htut told the Myanmar-language service of Radio Free Asia on Thursday. "I don't think it can happen at the moment."

Public debate on the constitution came to the fore around the Nov. 12-14 visit of President Barack Obama to Myanmar. Obama said it made little sense for the constitution to freeze out Suu Kyi from becoming president.

Lower house speaker Shwe Mann said last week that the constitution could not be changed before a general election in 2015.

Ye Htut spoke after military MPs turned down an invitation from Suu Kyi for a first meeting over dinner on Thursday as she sought to build ties with representatives of Myanmar's most powerful institution ahead of the proposed summit.

The military bloc sent a letter to Suu Kyi to apologise for being unable to make the dinner in the capital of Naypyitaw due to a prior engagement, said Nyan Win, a spokesman for Suu Kyi's National League for Democracy Party (NLD). The invitation was received at short notice for military lawmakers to change a scheduled meeting, one military parliamentarian told Reuters.

Suu Kyi, who was kept under house arrest for more than 15 years by the ruling military junta, has endorsed reforms by Thein Sein's government. But she has criticised its hesitation on further reforms and Her party has gathered about 5 million signatures in support of a petition to amend the constitution.