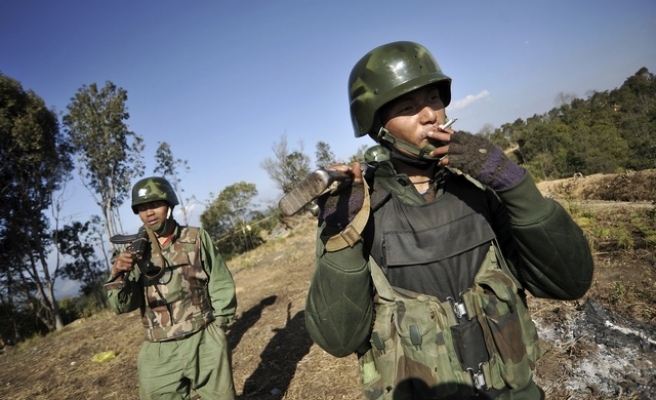 A Myanmar army shell killed 23 cadets of an ethnic insurgent group in the deadliest attack since a ceasefire agreement broke down in 2011, the group's deputy commander said on Thursday.

The shell hit a cadet training centre on the outskirts of Laisa, the Kachin Independence Army capital on the border with China in Kachin state, on Wednesday, said General Gun Maw, the KIA's second-in-command.

He said the attack brought the number of KIA soldiers killed since 2011 to more than 300 and that 15 cadets were wounded in the blast, one of several attacks in KIA-controlled areas throughout the day.

Myanmar's military has no spokesperson and government spokesman Ye Htut did not respond to requests for comment.

A senior military official told Reuters the attack came after several days of mounting tension between the military and the KIA, which he said had shelled government soldiers building a road near Laisa.

"Two of the wounded soldiers are still in critical condition," he said on condition of anonymity as he was not authorised to speak to media.

The International Committee of the Red Cross (ICRC) has a medical evacuation team station in Laisa, but said the KIA evacuated the wounded to the town hospital on its own.

"As far as we are aware, there were no civilian casualties," said Michael O'Brien, an ICRC spokesman in Myanmar.

The attack comes as representative from various ethnic armed groups prepare to meet military officials for the next round of negotiations on a nationwide ceasefire, which the government has said it wants before next year's election.

The latest round of peace talks between guerrilla groups and the semi-civilian government that took over in 2011 after nearly 50 years of military rule ended on Sept. 27 without agreement.

Most of the rebel groups have been battling for greater autonomy under a federal system but the military has long stressed the need for strong, centralised government, as set down in a 2008 military-drafted constitution.

Gun Maw said Wednesday's attacks were intended to pressure the KIA to sign an agreement with terms favourable to the military and to delay the elections.

He said there were indications that the military was preparing for a wider offensive by moving troops and heavy weapons into northern Shan state, near KIA-controlled territory.

The KIA took up arms in 1961 and is the second largest among the approximately 20 ethnic armed groups in Myanmar.