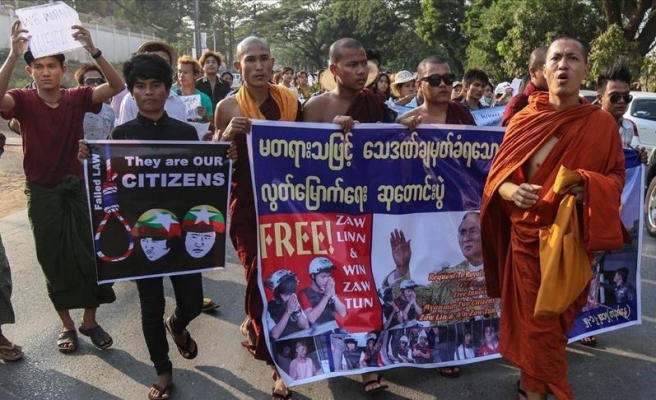 The trial of two Myanmar Muslims -- already given two years jail on immigration offenses -- was postponed until next week Thursday after they were told fresh charges were being levelled against them which could see them spend a total of five years in prison.

The 28-year-old man and 34-year-old woman are among three activists on trial from interfaith group Thint Myat Lo Thu Myar (Peace Seekers), which was founded by a Buddhist monk in 2013 after anti-Muslim riots broke out in Meiktila in central Myanmar.

The duo appeared in court Thursday on charges under article 17 of the Unlawful Association Act, but now also face new charges -- all based on images taken during a 2013 visit to Laiza city in northern Myanmar.

If found guilty, the man and woman could be sentenced to a further three years imprisonment and also a fine for breaking article 17.

Mandalay is Myanmar's second largest city and the stronghold of Buddhist hardline group Ma Ba Tha (the Organization for the Protection of Race and Religion).

Soon after the visit, Ko Zaw Zaw Latt posted photos of himself to Facebook with rebels and in the company of Buddhist monks, in many cases smiling and laughing, as well as holding a rifle.

He was arrested in July 2015 after Ma Ba Tha -- and other religious nationalists -- waged a public campaign on social media and through journal Ahtu Mashi against him.

The Ahtu Mashi article claimed Zaw Zaw Latt was encouraging interfaith “mating”, working with “Buddhist monks who betray Buddhism” and referenced his contact with the KIA and the photograph of him holding a rifle, adding: “No one knows who he will be pointing the gun at [next].”

The article called on authorities to “take legal action against him and punish him,” accusations that appear to have led to to the postponement of Thursday's trial.

On Thursday, Muslim human rights lawyer Robert San Aung slammed the charges the activists face as draconian, saying that no other national facing such charges had received such an excessive sentence.

"As my knowledge, this is the strongest penalty for such charges," he said. "I think the authority and court want to please Buddhist nationalists as Mandalay is the stronghold of Ma Ba Tha that is closely monitoring such cases."

An assistant to lawyer Thein Than Oo told Anadolu Agency that Zaw Zaw Lat and Pwint Phyu Latt were due to appear at Thursday's hearing in Mandalay’s Chan Aye Thar Zan Township, but the judge postponed it until March 9 without any reason.

Matthew Smith, Executive Director of Fortify Rights, has called the charges "politically motivated", and said that they should be dropped immediately.

“This is yet another case of Myanmar’s law enforcement catering to the religious-nationalist movement," he said in a Feb. 7 statement, calling on Myanmar authorities to stop targeting interfaith activists and instead protect them.