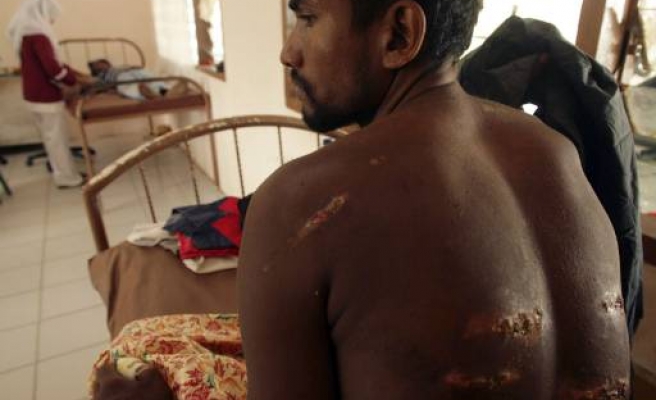 The Nobel Prize-winning charity has been giving health care to both ethnic Rakhine Buddhists and Rohingya Muslims, a mostly stateless minority who live in apartheid-like conditions and who otherwise have little access to healthcare.

"Free, regular and open access is essential to ensure the benefits of humanitarian activities are delivered appropriately to all people of Rakhine State," a U.S. embassy official told Reuters.

Government spokesman Ye Htut told media that MSF had been ordered to cease operations. He accused the organisation of falsely claiming it treated victims of violence around the time of a massacre in mid-January, which the government denies took place.

The United Nations and human rights groups say at least 40 Rohingya Muslims were killed by security forces and ethnic Rakhine Buddhist civilians in a restricted area of the conflict-ridden western state.

MSF said on Jan. 24 it had treated 22 people in the area of the assacre for injuries including a gunshot wound, stab wounds and beatings.

A diplomatic source who declined to be identified told Reuters that MSF was in negotiations with officials in the capital, Naypyitaw, after suspending operations late on Thursday.

Myanmar's government has repeatedly rejected reports by MSF, the United Nations and human rights groups that Rohingya villagers in Maungdaw township were attacked and their homes looted.

On Jan. 29, the government called diplomats to a briefing where officials said they had found no evidence of a massacre, but promised further investigation.

A request by U.S. Ambassador Derek Mitchell to include an international representative on the investigating team was denied by Foreign Minister Wunna Maung Lwin, who said it was "an internal affair".

Incidents in Maungdaw township and other parts of Rakhine state are difficult to verify independently as they are off limits to journalists and the government controls access by international aid groups, despite a wave of democratic reforms since military rule ended in 2011.

If confirmed, the massacre would take to at least 277 the number of people killed in religious conflict across Myanmar since June 2012. More than 140,000 people, mostly Muslims, have been displaced.

Most of the victims were Muslims and the most deadly incidents happened in Rakhine State, where about a million Rohingya live.

MSF has worked in the state for almost 20 years treating hundreds of thousands of people from all ethnic groups through programmes including maternal health and treatment for HIV and tuberculosis, according to its website.

"Insecurity, delayed authorisation and repeated threats and intimidation by a small and vocal group of the Rakhine community have hindered MSF's work," the group said on its website.