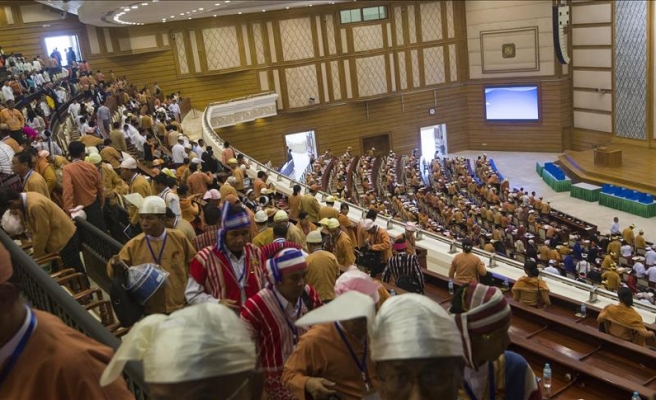 Almost three months after the National League for Democracy (NLD) won a landslide victory in Myanmar’s national elections, its members finally took their seats in parliament Monday -- row upon row clad in its trademark rich ochre.

Of the 491 elected seats in the two national parliaments, the military-backed Union Solidarity and Development Party (USDP) now fills just 41 while the NLD has 390 -- enough to control both houses, and the country's first democratically elected government in more than 50 years.

Htay Oo, the vice chairman of the USDP -- its party members in green and white marooned in a sea of earth tones -- told Anadolu Agency that they had expected to win at least 30 percent of the vote.

“To be honest, the election results made us really upset,” he added.

The upper house will convene Wednesday to vote for its speaker -- one of parliament's most powerful positions -- and deputy.

The speaker decides what issues are discussed in parliament. With the NLD's majority, both its nominations are expected to be elected.

Of the 491 lawmakers, 115 are former political prisoners labeled "enemies of the state" by the former regime.

Myat Thu of the Yangon School of Political Science told Anadolu Agency on Monday that their presence will no doubt upset members of the opposition and the country's former regime.

“It’s amazing to see the parliament full of former political prisoners,” he says, adding that the junta-affiliated opposition would never have imagined losing their seats.

Ex-Lower House speaker Shwe Mann -- ousted from his role as USDP chairman last year amid a power struggle with then President Thein Sein -- expressed his confidence in the incoming parliament, but told Anadolu Agency that the "right people had been in the right place as [the] people elected them.”

“No one will deny that the current [outgoing] government and parliament worked well,” he says.

From 1962 to 2011, Myanmar was ruled by an oppressive military junta in which generals suppressed almost all dissent and stood accused of gross human rights abuses, prompting international condemnation and sanctions.

The dictatorship was terminated by the 2010 NLD-boycotted general election, in which the USDP won a vast majority.

Many analysts have claimed that much of the NLD's landslide victory was not necessarily a vote for the NLD, but rather a vote against the military regime -- of which the USDP was seen as a proxy.

“The party loss was [so large] because people voted for what they have wanted for a long time,” Shwe Mann says.

The current term of government will expire March 30 with the new government taking office.

“The biggest challenge is how to deal with the powerful military. How do you make further reforms that will hurt their interests?” asks Myat Thu.

“They need to take great care."

Others have underlined the major challenge the NLD faces.

“It will be difficult for the next government to meet the people’s expectation,” says Shwe Mann.